By Gary O'Toole
Joe Biden was born at 8.30 a.m. (A Rodden Rating) on 20th November 1942 in Scranton, Pennsylvania. Below is his North and South Indian style birth chart using sidereal calculations. 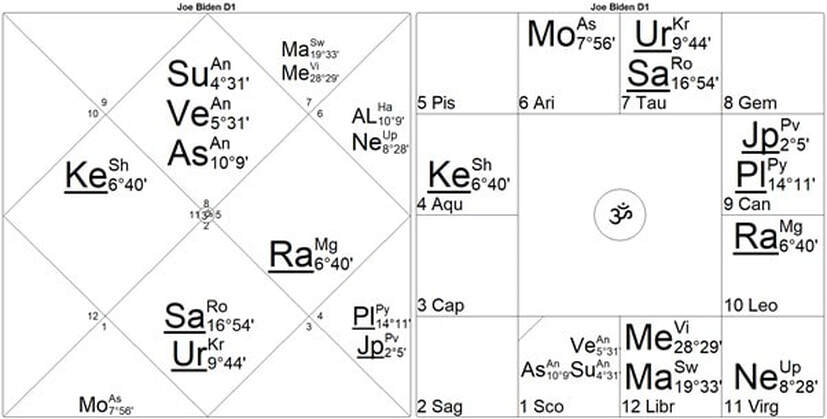 Biden's Birth Chart
Although Joe Biden's time of birth is not an AA rating, and so may not be exact, it will not alter his planetary cycles very much if the time is off by a few minutes. And it will not alter at all the sign-based cycles given. That is because the progressed signs used in Chara are based on the rising sign at birth. This is regardless of whether the very beginning of very end of the sign was rising during this birth. The rising degree was 10 degrees of Scorpio at 8.30 am on the morning of his birth. It is unlikely to change signs, even if we  adjust the time by two hours later or 50 minutes earlier. In other words, we can be pretty certain his rising sign is Scorpio and use the sign-based cycles. The planetary cycles may change a little, but not a lot, based on an adjusted time. The first thing to check is his planetary cycles. ​ 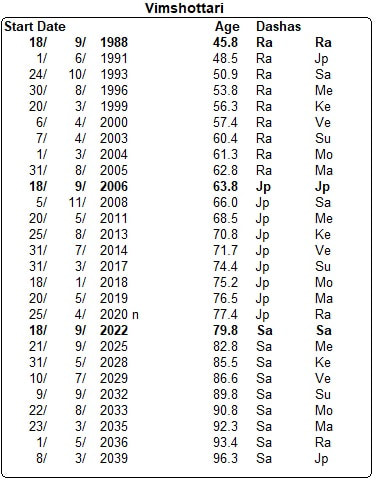 Biden's Planetary Cycles
​He experienced a Jupiter-Rahu cycle during the election in November 2020. This was more than likely Jupiter-Rahu-Jupiter. Jupiter is in his 9th house of good fortune and good luck. Although exalted in Cancer, it is retrograde. This creates a mixed-bag of results for his Jupiter cycle. Rahu is in the prominent 10th house, the powerful Leo, while the Sun, the ruler of Leo, is in Scorpio, his rising sign. This is a powerful combination and one which saw him come into power. 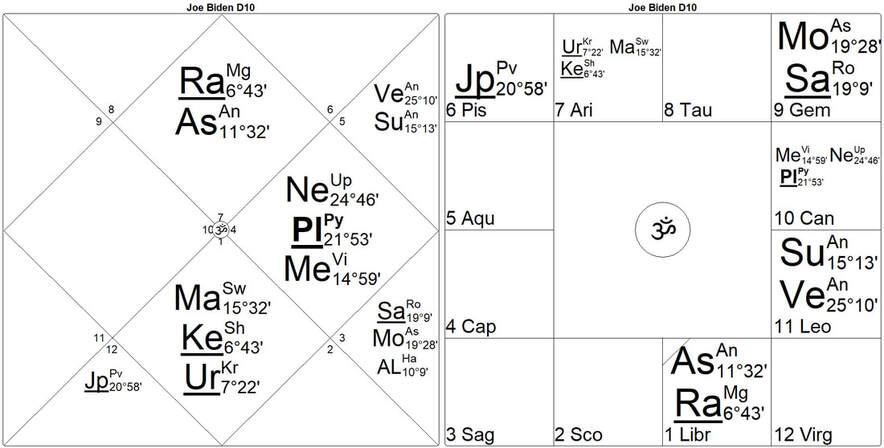 10th Divisional Chart
His 10th divisional chart, used to see career, has Rahu in the 1st house. Rahu's cycle triggered his career in a big way. This reflects the changes you was going through, and his win thanks to Rahu. Rahu happens to be the planet with the second highest degree in his natal chart. This links it with powerful allies in politics and political success. This was his 3rd attempt at becoming president. Although Rahu gave him success, there is always a price to pay for Rahu. Whatever success he has achieved, Rahu can show personal challenges.
​
Rahu is the last sub-cycle in his long Jupiter period. This is one of the more challenging transitional phases in the planetary cycles. He has lived long enough to have experienced 18 years of Rahu, previous to Jupiter's current major cycle. He has been here before many times, in fact. This was a case of third time lucky for gaining the most powerful seat in U.S. politics. This way his last stab at it. Although he succeeded where he did not before, he knows it is coming to an end. On some level, he is aware of Saturn's upcoming cycle, which begins in September 2021. This is when he will likely step back from public life or is forced to for some reason.

This is not only because he is entering a Saturn cycle, which can show a need to work hard, but because he is experiencing a Saturn stage of life. Now that he is approaching 80 years of age, Saturn is more likely to get him to step back. When we add this to the upcoming Saturn cycle, which aspects his rising sign, it will likely mean a pulling back from public life and work to some degree. Saturn is placed in the 10th house from his 10th house, which is an obstruction to his career.

Although Rahu gave him the power he so craved for years, it is all too little and too late, in a way. He has declared as much in speeches where he has spoken about his role as a bridge to who is coming up behind him.

To see whether he would win the election, there were a few key ingredients to look over. First, the planetary cycle primes him for power, with Rahu triggered alongside Jupiter. Counting from Jupiter to Rahu and the same again, we arrive at his 11th house of gains. Jupiter was transiting Sagittarius at the time of the election, in a powerful position at the very end of the sign, and in his 2nd house. The 2nd house relates to resources and his vision, as well as his speech. This expressed itself as him stating a case for healing and recovery for the nation. We must place his chart in context of what was going on at the time. His comforting words (Jupiter in 2nd) would have been sweet music to many voters ears. Jupiter is the most comforting influence. This would have shown his ability to instill hope in voters’ minds. Here are the sign-based cycles.

Sign-Based Cycles
The sign Sagittarius was active on a major level, with either Virgo or Leo active on the 2nd level. One could make an argument for taking a year off this calculation, a year added for his Pisces cycle due to Jupiter's exaltation. A year has been added on for his current Sagittarius cycle. This is because Jupiter is exalted. Yet Jupiter is retrograde, cancelling some of its benevolence. Some astrologers, including K.N. Rao, did not use this added year at all. I have found not adding or subtracting a year for debilitated planets seems to fit in real-life case studies.

Taking out the added year, he would likely have been experiencing a Sagittarius-Leo cycle after the election. This points to coming into power, with Leo being his 10th, housing Rahu. Sagittarius has its complications, of course. The fact that Jupiter is exalted, yet retrograde, placed in the 8th house from Sagittarius, suggests some controversy. This was the case when his son (Jupiter rules his 5th house) was involved in a scandal before the election. A combination of Jupiter and Rahu could show deceit.
​
Here is the chart for the day of the election itself, and the third piece to consider, that of the transits on the day of the election. The chart is cast for the opening of the polls at 7.00 am on November 3, 2020, in Washington, DC.

U.S. Election 2020
Read about why 2022's transits and cycles in his chart point to him stepping back or even stepping down.

Become a patron and read the rest