By Gary O'Toole
With Contributions from Patrons of Timeline Astrology
Image by JP Metsavainio
Aquarius is the natural 11th sign of the zodiac, representing our goals, gains, groups of people, and networks, including friends, associates, and society in general. With that in mind, I invited patrons of Timeline Astrology to contribute their thoughts about Jupiter’s transit in Aquarius in 2021 and 2022. An astrology think-tank if you will.

Aquarius is the most unusual and paradoxical sign. It is ruled by the orthodox Saturn, representing the masses, but also the unconventional Rahu, the northern lunar node, which refuses to conform to the status quo. It’s an air sign, the chief characteristic being movement and free thinking. But it’s a fixed sign. How do you fix air? Well, this can be reflected in fixed ideas about how things should be in the future, or an obsessive focus on changing what is. However, it’s a bit like trying to tame the wind!
​
While the fixed sign Taurus is more suited to being stabilized in this way, represented by the earth element, Aquarius is in direct contrast to this sense of stability. It wants freedom. Something to be mindful of when we see transits either opposing or contrasting (squaring) Jupiter in Aquarius form the signs Taurus, Leo, and Scorpio.

Aquarius is like a scientist obsessing for hours in the lab, trying to solve a complex problem. One day, he or she just happens upon it by ‘accident’. The hours spent obsessing was probably what led to the discovery, of course. We experience the same thing every time we grapple with a problem, only to find the solution when we are stop thinking about it. The fixation has its purpose.
​
Those with Aquarius prominent are ‘tomorrow’s people’, as my astrology teacher used to say. They are the movers and shakers in our society. They change things for us all, through their innovations and inventions, all geared towards creating a better society, including advancements in science and technology: two key significations of the sign.

But there are many complexities for those with the sign prominent, the first being that it is the natural 11th house, which is the 6th from the 6th, and known as Bādhaka in Indian astrology, showing as many blocks as gains. And just as with Scorpio, another fixed sign that is ruled by one of the lunar nodes (Ketu), Aquarius is all about change and transformation. Yet because these are also both fixed signs, they find it difficult to adjust. One could argue that Aquarius is the most challenging, being ruled by the most ‘malefic’ in Indian astrology; that is, Rahu.

As much as Aquarius is about problems in the present, it is about finding solutions in the future. Those with the sign prominent see solutions where others cannot. These traits are reflected in innovative and insightful Rahu. Rahu is an eclipse, of course, a shadow, and can lead them astray, too. They must adhere to the rulebook of Saturn, so they are not lost in the shadows.
​
Aquarius is eccentric, bold, and a complete and utter paradox. On the one hand, it promotes community and unity, but on the other, personal freedom and individualism. It’s an air sign and yet its symbol is a water bearer, a hint at the need to contain the ideas that are flowing through the vessel, to have a solid framework for all those innovative ideas.

Aquarius is all about humanity, society, but while those with Aquarius prominent are humanitarian in their approach, they are seen as weird, i.e., they do not subscribe to the general consensus and don’t typically fit into the mainstream. Yet another paradox. But how else are they to create those innovative ideas? They may be ruled by Saturn, representing the common man, but they do not like to conform. Being co-ruled by Rahu, it makes them feel like an outsider.

Those with the sign prominent are always pushing the boundaries of what is possible, and pushing other people’s buttons many times, too. They are always remembered for the work they do to advance society. Without individuals like them we would not make as much progress, or as quickly.

A good example of this is Abraham Lincoln, who had Aquarius rising in his birth chart. He was certainly a mover and shaker. In his time in office, he abolished slavery (Aquarius represents freedom), bolstered the federal government, and modernized the US economy. Lincoln was a free thinker and ahead of his time, as all Aquarius individuals are.
​
Abraham Lincoln was born on Feb 12, 1809 at 06.54 in Hodgenville, Kentucky, USA. 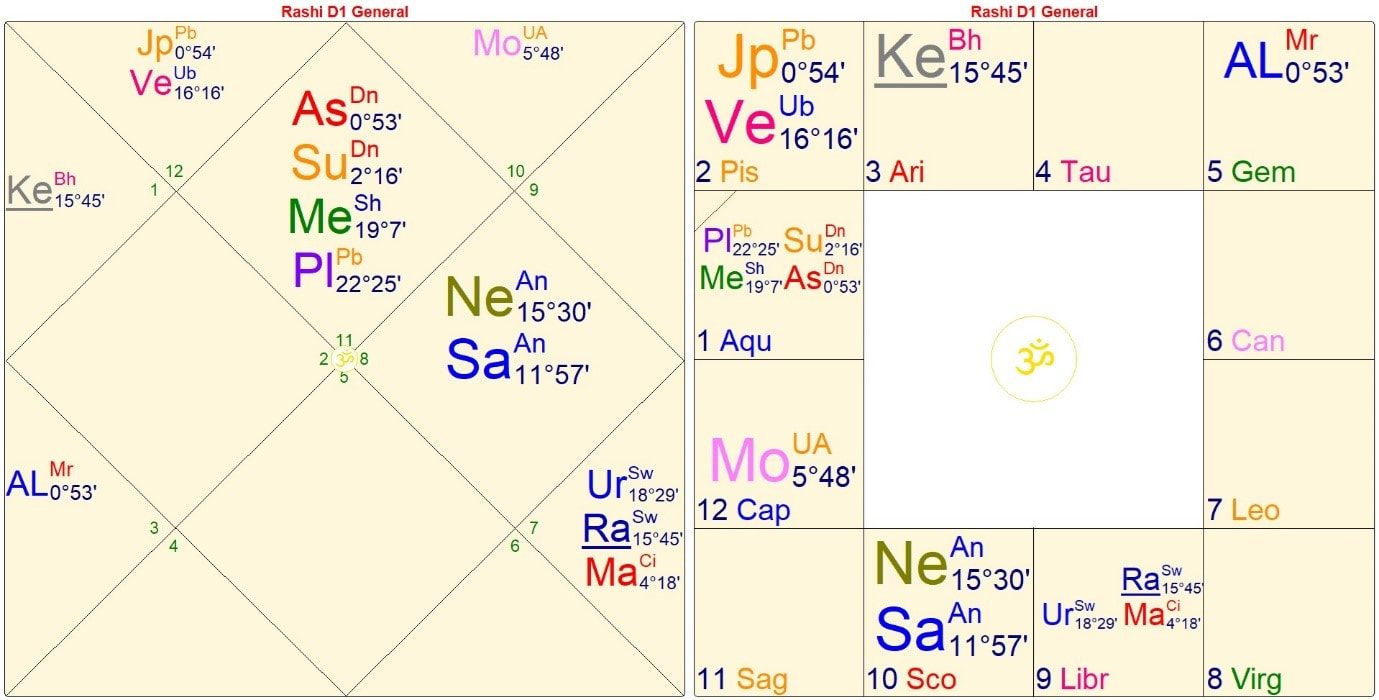 Lincoln was a religious sceptic when younger. This would not have gone down well with the orthodoxy of the time. Aquarius is not about religion. That is the domain of the following sign Pisces. Jupiter had just moved into Pisces when he was born. While Aquarius doubts and questions everything and everyone, Jupiter’s position in Pisces would have shown his religious beliefs.
But Rahu, his ruler, the innovator, is placed in the 9th house of religion, too, reflecting his unconventional approach. Although he was a religious sceptic, he was able to quote the Bible. This shows the obsessive quality of Rahu that can also lose perspective.
The doubts those with Aquarius prominent harbour, the ‘imposter syndrome’ they are apt to experience, is what propels them further than they would otherwise, challenging themselves and everyone around them in the process.

Lincoln is quoted as stating the following: “The legitimate object of government is to do for a community of people whatever they need to have done, but cannot do at all, or cannot do so well, for themselves, in their separate and individual capacities.” This sums up the role of Aquarius.

So, what has Abraham Lincoln got to do with Jupiter’s upcoming transit in Aquarius? Isn’t Aquarius all about the future? Yes, of course, but this must include learning from the past - so we can better move forward.

Jupiter’s transit in Aquarius will likely bring up the issue of questioning the current scientific view. Aquarius is all about doubting the commonly-held view, so we can progress. Ultimately, Jupiter in Aquarius will likely be about developing faith in the science, in the numbers. This is the paradox of the sign: doubts give us a sense of needing to find out the truth. There is no blind faith here, only a rigorous scientific reasoning.

Another historical figure that has something to teach us about Aquarius, particularly Jupiter in Aquarius, is Leonardo da Vinci. Da Vinci was born when Jupiter was transiting the sign, and I need not remind you of his contribution to society or his many inventions. He was a painter, architect, inventor, and scientist. His natural genius crossed so many disciplines that he epitomized the term ‘Renaissance man’ and is why he has something important to teach us in our modern era, as we look to a possible Renaissance 2.0. 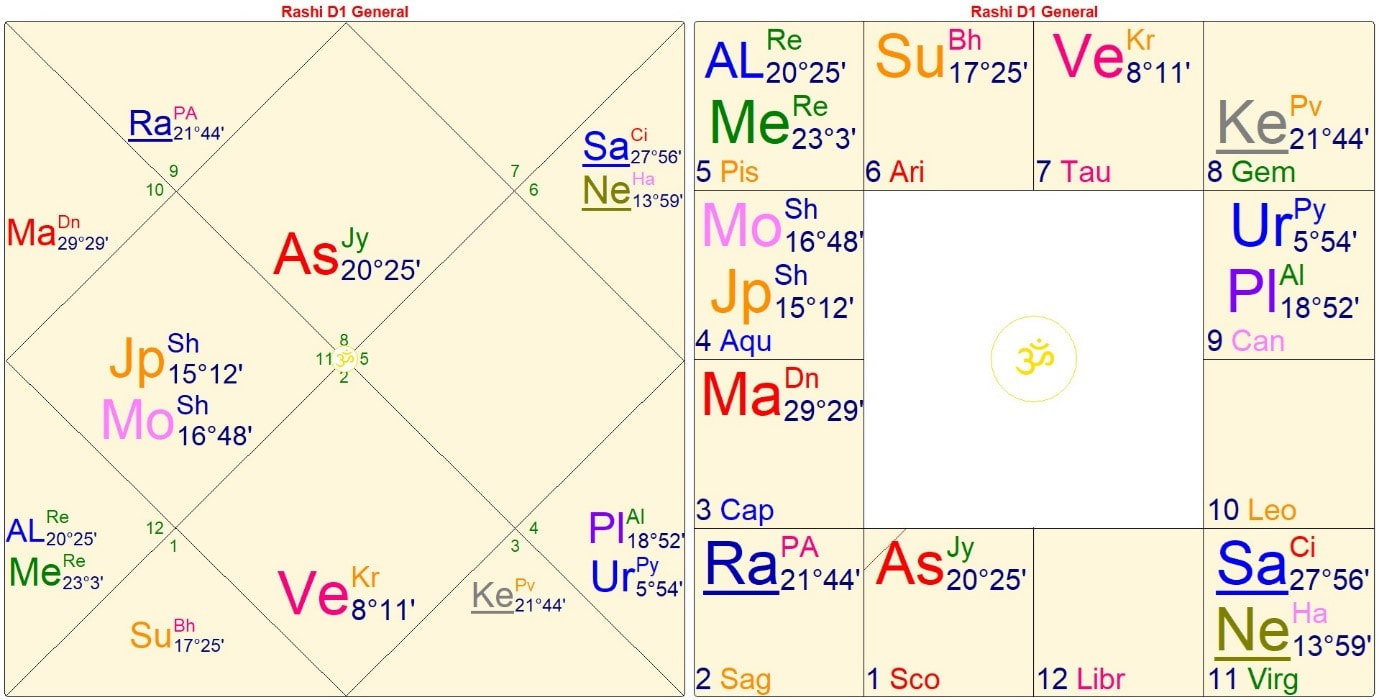 Another who has something important to teach us about Jupiter in Aquarius is physicist and chemist Marie Curie. She was the first woman to win a Nobel Prize, and the first and the only woman to win it twice, in two scientific fields.

Curie may have been a pioneer in science; however, she has something to teach us about personal sacrifices for the sake of a cause. While her discovery of radioactivity ultimately led to treatments for cancer, her own health suffered due to her exposure to radium. She may have been a pioneer in science, but she lacked a personal awareness or its effect on those closest to her. This is often a case with those with Aquarius prominent.

Personally, she was treated as an outsider, and a libertine (Aquarius is not a Godly sign), and even a threat to French family for having an affair with a married man. But her contributions to humanity is what lives on, as her personal challenges fade into the background. 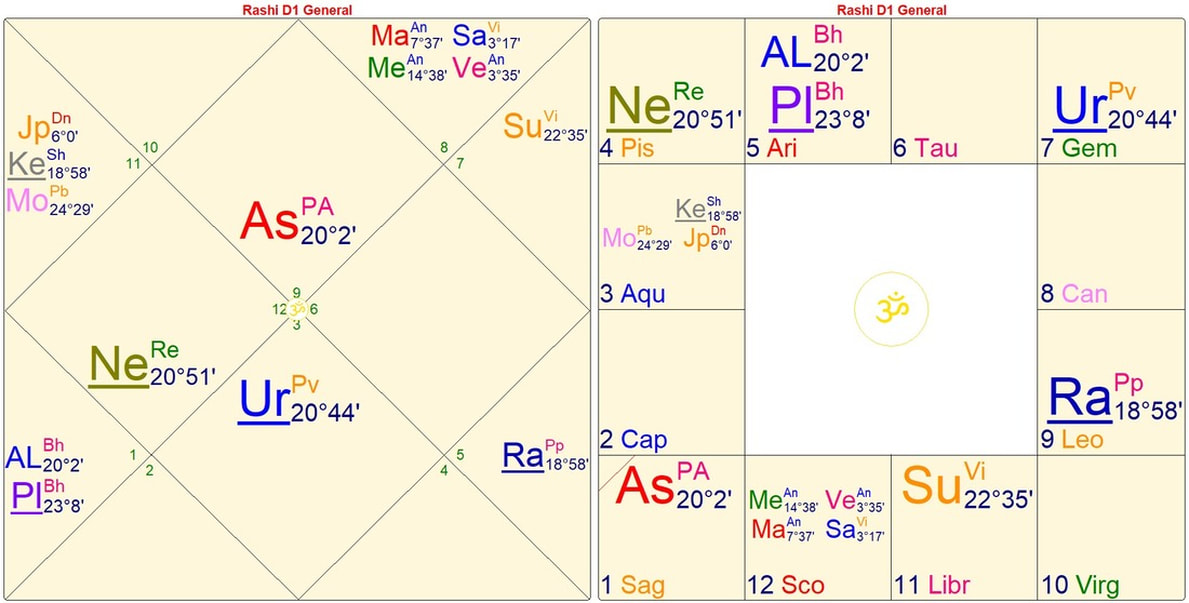 ​As we venture forth and begin to build our new society, Jupiter in Aquarius will teach us something important about the values we hold around groups of people. Jupiter rules the 2nd and 11th houses from Aquarius, Pisces, and Sagittarius, which is what makes Aquarius value (2nd house) groups of people (11th house) more so, and why we will probably be focused on these in the coming year.
​
Jupiter will transit sidereal Aquarius from April 5, 2021 to April 13, 2022, except for a brief return to Capricorn from September 14 to November 20, 2021.
​
Become a patron and read the rest, including patrons' contributions, the astrological significance of Kumbha Mela and how this will likely impact each sign.
​
​OM TAT SAT