A useful mantra to begin with is one for Gaṇeśa, the lord of 'Vedic' astrology and the 'remover of obstacles'. The above mantra is a simple place to begin mantra recitation. Be aware, however, there are some Sanskrit rules to adhere to for proper pronunciation.

​This is fine when you only have one in a word, but gets a bit tricky when there are several in one word, as you will see in the above mantra. A good practice is to right down these sounds as 'aaa' for ā and 'uh' for a.

There are many rules around Sanskrit pronunciation which I cannot get into here, but this is a good place to start.

​For the above mantra, there's another rule when the seed mantra for Gaṇeśa, GAṂ is followed with a 'ga' sound. Instead of sounding GAṂ ​with an 'm' sound to the lips, the 'm' sound is made at the back of the throat and ends up sounding like 'gan' or 'gong'. This is why you often see this mantra written as Om Gong Gaṇapataye Namaḥ or Om Gan Gaṇapataye Namaḥ.

The word Namaḥ is pronounced numuha when there is no other sound following it. This is called a visarga, producing a slight echo of the preceding vowel sound. If the word Namaḥ were found within a mantra, such as Om Namaḥ Śivāya, this would be pronounced as just numuh, without the echo sound.

Gaṇeśa in your Birth chart 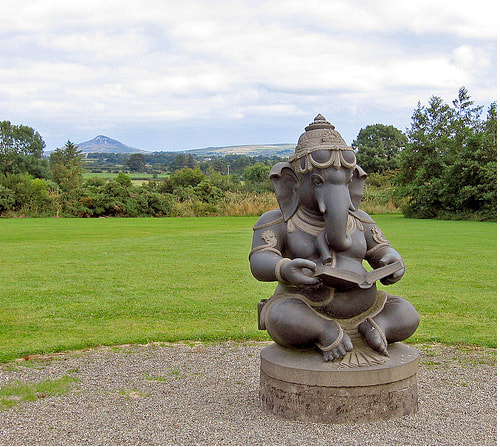 Gaṇeśa statue at Victor's Way, Co. Wicklow, Ireland
To make a Gaṇeśa mantra more specific to your needs, you could chant a form of Gaṇeśa based on the position of the south node (Ketu) in your horoscope, as Ketu is represented by Gaṇeśa and helps us to remove the obstacles of the north node, Rāhu.

​The following are the mantras for each form of Gaṇeśa​ (Ketu) in each zodiac sign, where the mantra huṁ (pronoucned hoom) is added to each form:
​
Aries
vakratuṇdāya huṁ
​
​Taurus
ekadantāya huṁ
​
​Gemini
kṛṣṇapiṅgākṣāya huṁ
​Cancer
gajavaktrāya huṁ
​Leo
lambodarāya huṁ
​Virgo
vitaṭāya huṁ
​
​Libra
vighnarājāya huṁ
​Scorpio
dhūmravarṇāya huṁ
​Sagittarius
bhālacandrāya huṁ
​Capricorn
vināyakāya huṁ
​Aquarius
gajapataye huṁ
​
​Pisces
gajānanāya huṁ
There is another, even more specific way, to use the above mantras. You could find the planet which rules the 11th sign of your birth chart if you have a movable rising sign, i.e. Aries, Cancer, Libra or Capricorn, or the 9th sign ruling planet if you have a fixed sign rising, i.e. Taurus, Leo, Scorpio or Aquarius, or the 7th sign ruling planet if you have a dual sign rising, i.e. Gemini, Virgo, Sagittarius or Pisces.

Find the planet that rules this sign and chant the mantra for the sign opposite this planet's placement in your birth chart, using the sign and mantra above.

​This method is a more specific way to begin removing blocks you experience personally.
​
​
​
2. Increasing Clarity

The Sāvitrī Gāyatrī is the oldest known mantra in continuous use, taken from Ṛg Veda 3.62.10, c. which is said to date around 1200 BCE, or older, according to Sanskrit scholar Christopher 'Hareesh' Wallis. The mantra contains 3 lines of 8 syllables each, ideally chanted with one out breath. ​OM̐ bhūr bhuvaḥ svaḥ is prefaced to the 3 lines found in the Ṛg Veda.

Translation by Christopher Wallis (hareesh.org):
​
"Om. Earth. Atmosphere. Heaven. May we focus our awareness on the alluring radiance of the rising and setting sun, the Vivifier; may He inspire our thoughts and meditations."

Savitur is the Sun god, particularly the rising Sun which rules over the lunar mansion, Hasta (meaning 'hand'), found entirely within sidereal Virgo. This mantra is ideally recited during sunrise, facing east, pouring water into one's hand and onto the Earth, as one greets the new day and the illumination the Sun provides. Traditionally, it was also recited at noon and sunset.

​Mrtyuñjaya mantra is a very special mantra when it comes to allaying fears. It is chanted for Śiva, 'the destroyer'. The destruction referred to here is that of one's fears. This mantra is a powerful tool to make you feel strong on every level of your being, and can be used to overcome illness. Chanting it every morning and evening for 40 days is said to bring healing, and a healer, if needed.

As you will read in the translation the sounds of the mantra directly correspond to the meaning of the words being chanted. So, for example, the Sanskrit word yajāmahe , when chanted correctly, captivates the meaning 'we sing thy praise' very well. The Sanskrit word bandhanān really captures the sense of being 'bound down'.

Listen to Christopher 'Hareesh' Wallis explain the proper pronunciation of this mantra below.
​
​

"O! Three-eyed Lord Shiva (three luminous eyes represent the Sun, Moon and Holy fire) we worship Thee; Thy (name and fame) spreads like sweet fragrance as Thou art the savior of all beings.  I am under the bondage of dreadful diseases (of the mind, body and soul) and pray that Thou shalt deliver us from (all evils including) death (for the sake of immortality) by granting us some life rejuvenating nectar".

"OM is not spelt out in the Rig Veda, but has to be added to the beginning of all Mantras as given in an earlier Mantra of the Rig Veda addressed to Ganapati (Ganesh).
TRYAMBAKKAM refers to the Three eyes of Lord Shiva.  ‘Trya’ means ‘Three’ and ‘Ambakam’ means eyes.  These three eyes of sources of enlightenment are the Trimurti or three primary deities, namely Brahma, Vishnu and Shiva and the three ‘AMBA’ (also meaning Mother or Shakti are Saraswati, Lakshmi and Gouri.  Thus in this word, we are referring to God as Omniscient (Brahma), Omnipresent (Vishnu) and Omnipotent (Shiva).  This is the wisdom of Vashistha Maharishi and is referred to as Sri Dattatreya having three heads of Brahma, Vishnu and Shiva.
YAJAMAHE means, ‘We sing thy praise’.
SUGANDHIM refers to His fragrance (of knowledge, presence and strength i.e. three aspects) as being the best and always spreading around.  Fragrance refers to the joy that we get on knowing, seeing or feeling His virtuous deeds.
PUSTIVARDHANAM: Pooshan refers to Him as the sustainer of this world and in this manner; He is the Father (Pater) of all.  Pooshan is also the inner impeller of all knowledge and is thus, Savitur or the Sun and also symbolizes Brahma the Omniscient Creator.  In this manner He is also the Father (Genitor) of all.
URVAAROKAMEVA: ‘URVA’ means ‘VISHAL’ or big and powerful or deadly.
‘AAROOKAM’ means ‘Disease.  Thus, URVAOOKA means deadly and overpowering diseases.  (The CUCUMBER interpretation given in various places is also correct for the word URVAROOKAM, but not apt for this mantra).  The diseases are also of three kinds caused by the influence (in the negative) of the three Gunas and are ignorance (Avidya etc,), falsehood (Asat etc, as even though Vishnu is everywhere, we fail to perceive Him and are guided by our sight and other senses) and weaknesses (Shadripu etc. a constraint of this physical body and Shiva is all powerful).
BANDANAAN means bound down.  Thus read with URVAROOKAMEVA, it means ‘I am bound down by deadly and overpowering diseases (of the body, mind & soul)’.
MRITYORMOOKSHEYA means to deliver us from death (both premature death in this physical world and from the never ending cycle of deaths due to re-birth) for the sake of Mokshya (Nirvana or final emancipation from re-birth).
MAAMRITAAT means ‘please give me some Amrita (life rejuvenating nectar).  Read with the previous word, it means that we are praying for some ‘Amrita’ or get out of the death inflicting diseases as well as the cycle of re-birth".