By Gary O'Toole
Photo Jossuha Theophile
Mars is retrograde from September 10 to November 14, 2020, from 4° Aries to 21° Pisces (Sidereal Zodiac)

Mars retrograde represents the courage to act based on previous actions. This builds inner strength and resolve, but it does not always come easily. We must be patient as the internal strength builds and learn to direct the energy through healthy channels. We may find ourselves doing things we used to do to gain strength, as we tap into huge reserves of strength within. But we may just as easily find ourselves at a loss, as if our system shuts down because we cannot handle the extra energy.
​Regrets, I’ve had a few… More than a few, actually. I was born when Mars was in Aries, in the first degrees of the sign, which is where we find the lunar mansion Aśvinī, one of the most impulsive signs of the zodiac. Aśvinī’ means ‘horse’, and is symbolized by a horse head, while the ram’s head is the more recognizable symbol for Aries. Whether we take the horse or the ram’s head, the need is to push ahead is pronounced. The horse reflects the sign’s swiftness and drive.

Mars moving into Aśvinī, placed between 0° 00' and 13° 20’ of sidereal Aries, suggests a spike in adrenaline, as we jump headlong into something new, freed from the restrictions of Saturn’s 3rd house aspect from Capricorn. This may challenge us to remain responsible in our actions. The strength is available, initially, at any rate, to do something courageous and new, to overcome something that has been holding us back.
​
There are some obvious conditions involved in starting anything new during a pandemic, and Saturn’s transit in Capricorn is contrasted (in an angle to Mars) to our need for movement and freedom. Once Mars moves back into Pisces, by October 4, it is back into a stronger aspect from restrictive Saturn. ​It may feel a bit like bridling a wild horse and putting in a stable - walking it backwards! 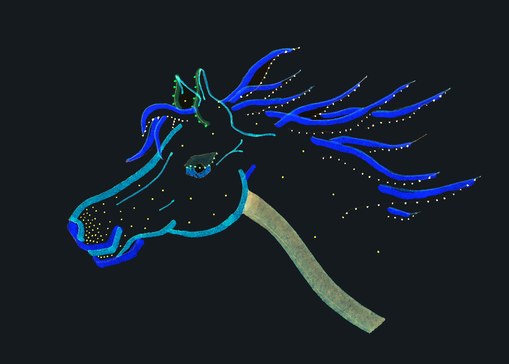 @Ranasamir
Aśvinī
Aśvinī’s ruling deities are the twin horsemen and physicians to the gods, the Aśvinī Kumaras, which suggests an initial progress in the search for a treatment for the virus. While Aśvinī often suggests a swift recovery from illness, Mars is disruptive. There will likely be a push for some new treatment or action plan as Mars enters the sign from August 16. Mars, Aries and Aśvinī all suggest a youthful energy and exuberance which can lead to swift action, perhaps even a protocol which promotes faster recovery.
​
Another indication of Aśvinī, symbolized by the horse, is movement and travel, or the need for such, at least. There is a problem with all of the above, with regards to healing, movement, and travel; that is, as Mars only makes it to 4 degrees of Aries and then stations retrograde, on September 10.

Although there is an initial push for freedom, for a cure, for acting on an impulse, for doing something new, this will be met with setbacks from mid-September, and until it stations direct once again on November 14, before Mars re-enters Aries on December 24.

​We are initially going to feel the need to move on something before we are met with obstacles and setbacks and have to go back over it. It will not be until the end of the year that we can move forward in relation to what we start in August.

Gaṇḍānta
The section of the zodiac known in Indian astrology known as gaṇḍānta, the ‘ending’ place in the zodiac, where both solar and lunar signs end, are where things come undone before being remade anew. This is where Mars will move back and over on three occasions, in August, October and December. These are sensitized junctures in the zodiac, where water signs meet with fire signs. More extreme tropical storms are one possibility, as are emotional outbursts when things seem to come undone.
The last section of Pisces, the last in the zodiac, represents a need to say goodbye to an old life, before starting anew in Aries. Mars moving back and forth over this section of the zodiac suggests we will be doing the same: starting something new, and then going back over something, before restarting it.

These junctures are a bit of a void or black spot for us to carefully navigate between worlds. Ketu, the south node of the Moon, is associated with this first section of Aries, and it is itself about to move through the section between fiery Sagittarius and into Mars’ watery and hidden realm of Scorpio. This means both of Mars’ signs, Aries, and Scorpio, are going through a lot of changes in the coming months, requiring us to reassess all our actions in a midst of a lot of uncertainty and change.

Ketu, the south node of the Moon, the ‘planet’ associated with Aśvinī, brings some hidden influences, and something to deal with from the past, which Mars helps us to externalize and overcome. But while we may wish to move forward with the exuberance of youthful Mars, there are other factors to look out for that we may not initially see, including the possibility of making mistakes.
Ketu represents past mistakes we are paying for now. It is a shadow or eclipse point, which means it represents the subconscious. It taps us up to other dimensions, other realities. It also rules viruses, things that are hidden. Mars’ transit in Aśvinī pushes things into our awareness, sometimes, very abruptly, so that we can deal with it, and rid ourselves of it. The recent explosion in Beirut is an example of bringing mistakes and negligence to light.

Mars can be destructive because it’s about finding strength, which is all about destroying our weaknesses. Mars sees everything as a battle. Every time we engage with Mars, we are overcoming something. Yes, we may cause problems in the process, but at least it feels better to be proactive. Mars in Aries has no time for procrastination, so Mars’ initial transit in Aries suggests we are all about to get all fired up and very active indeed.
​
There is, however, the issue of Mars stationing retrograde, which sends everything into reverse for a while.
Setbacks and Delays
Mars retrograde in Aries has its obvious downsides, sending the planet of action into reverse from our perspective, increasing the energy on the one hand, but not allowing it free expression, on the other. When we add the Saturn in Capricorn into the mix, we can see a stark contrast between our need for personal freedom and the needs of others holding up back, or restrictions put in place by governments once again.

Setbacks will be very apparent as Mars retrogrades from September 10, especially as it backs up into Pisces by October 4, and until December 24, coming back into a stronger aspect from Saturn. It seems no one is going anywhere that freely anytime soon, no matter how hard we may push. The initial push from mid-August through mid-September is met with a big push back from the subsequent Mars retrograde, a retrograde period which requires patience not always afforded to Mars’ transit in Aries.
I should know, as Mars is also retrograde in Aries in my birth chart, so I know a thing or two about this configuration. This has proven to be very strong internally, but sometimes too strong for me to handle, creating problems. A planet that is retrograde is powerful and yet hard to fully express. It's all or nothing. Likewise, my energy can be all or nothing.

There is a concept astrologer Martin Schulman writes about in his book, Karmic Astrology: Retrogrades and Reincarnation, which he refers to as phases; that there are 3 distinct phases someone with Mars retrograde will experience at different times.
Schulman writes about these 3 phases as follows:

See if you can wrap your head around the last phase - and welcome to my world! As an astrologer, I am always writing about the future. In my mind, the future has already happened many times before it actually does, and because of this by the time it happens I am having to relive it – as it happens!