By Gary O’Toole
The primal brain is interested in keeping us safe ... and in sex. So, it should come as no surprise that sex and survival are intricately linked. Sex is the very reason we’re here; but also, one of the reasons for the dwindling of our life force, spent all too easily without preservation of the essential juice that feeds our life.

When Rahu gets involved with Venus, the refined is polluted.
​
Rahu’s influence depletes ojas because the thing we crave leads to a loss of that very thing. A drug addict's need for the high leads to lows that they would never have known if not for their cravings. Rahu cuts off the flow, as we try to keep more of it (whatever it is) for ourselves; strangling the life force and flow like a python strangles its prey.
​ 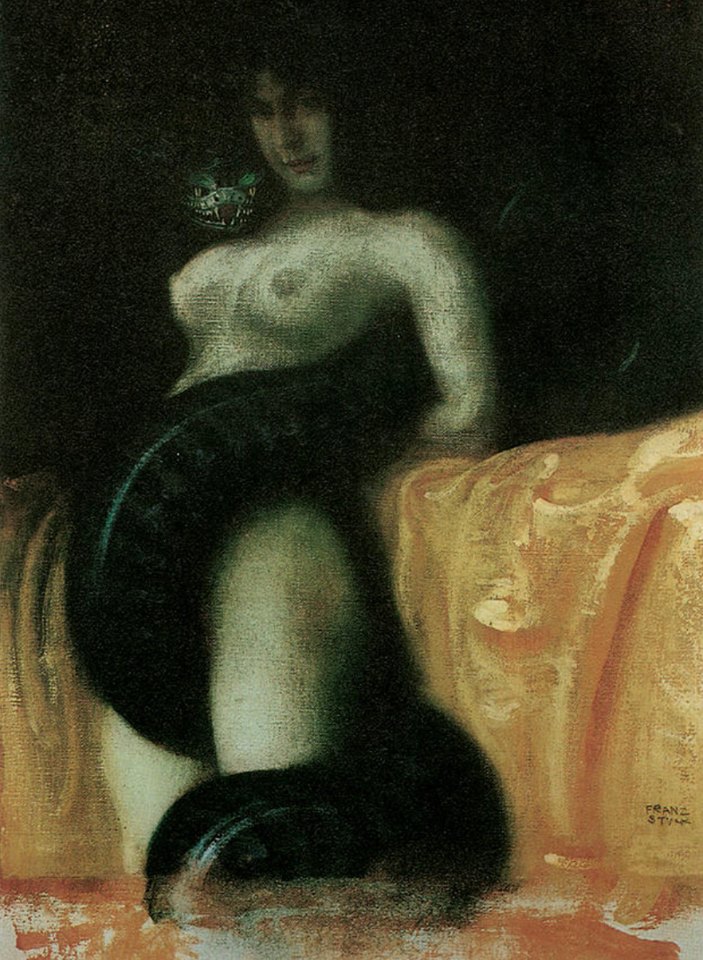 Sensuality (1891) by Franz Von Stuck
​Shadow Nature
​Rahu represents the sudden urges we cannot control; the shadow side of our nature that is expressed in the most inappropriate ways; the parts we hide and project onto others.

When we experience a Rahu cycle, they come to life. When these shadows combine with Venus, through aspects and cycles of Rahu/Venus or Venus/Rahu, the sexual urge can take on an exaggerated, dark tone. Anything from an obsession with sex, to manipulating people for your own pleasure, or being manipulated for someone else's pleasure (gaslighting), to the most extreme expression: rape.

These cycles have a profound impact on an individual’s ability to control his or her sexual impulses. This is especially the case when someone has Rahu and Venus in a strong aspect in their birth chart - even more so when this is triggered by transit during a Rahu/Venus cycle. Even without aspects, when an individual experiences a Rahu/Venus or Venus/Rahu cycle it is likened to a conjunction.

Rahu aspects the sign opposite, where Ketu, the south node is placed. It also aspects the 5th, 9th (same element) and 2nd from where it is placed, counting clockwise - although Rahu's aspects are said to influence counter-clockwise, which would be the 12th house from its position. An easy way to remember is that Rahu continues to influence the sign it has just left, as it transits anti-clockwise.

The fact that Rahu transits anti-clockwise, against the usual forward flow of planets, hints at its nature in going against norms.
​
Ragging Hormones​
Venus represents our hormones, while the natural cycle (naisargika) of Venus is from the age of 12 until 32; when we are generally more sexually active. It is no coincidence that these years are like a roller coaster ride of emotions. This is due to hormonal imbalances as a result of conventional sexual activity.

The main hormones involved are dopamine and prolactin. Dopamine drives us to have sex over most other activities, but once we have a conventional orgasm there is a drop in dopamine levels. It doesn't stay low, of course, as dopamine is highly addictive, and we're off again searching for the next high.

In her article, Pulling Away (After Sex), Marnia Robinson explains it succinctly:

​''The point is that conventional sex can play havoc with your neurochemistry. Much of the time, your dopamine levels will be uncomfortably high or uncomfortably low. Taoists and other sages throughout history have recommended making love without conventional orgasm. By avoiding the extreme highs that over-stimulate the nerve cells in the primitive brain, you also avoid the temporary lows that accompany recovery. You keep your dopamine levels within ideal ranges. This produces a sense of wellbeing, which promotes harmony in your relationship.

Both low dopamine and high prolactin make your world look bleak—and increase your craving for better sex or new partners who would raise your dopamine levels (and set you on another addictive cycle of highs and lows)''. 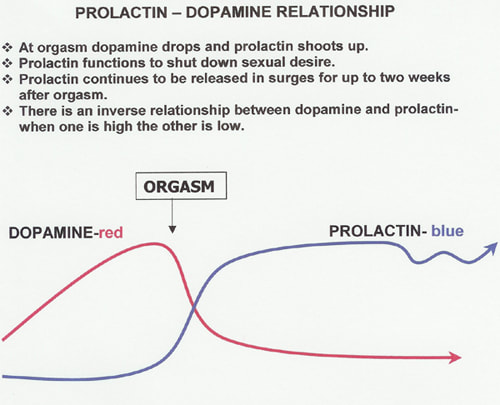 ​I can't get no...
If Venus is satisfaction, Rahu is the magnifying lens that asks, 'Are you really'?

Rahu says there’s more, and more, and more to try! If that doesn’t satisfy, try it this way. No? Let’s try something else! Before you know it, you realize why Mick Jagger was inspired to write ‘(I can’t get no) satisfaction’.

When Rahu combines with Venus, Rahu's counterpart, Ketu, is just as involved on the other end of a spectrum of dissatisfaction. But while Rahu says, 'Go for it' and you try to get some, Ketu says, 'Why bother? There's so much more to you'.

When experiencing a Rahu/Venus or a Venus/Rahu cycle one can become completely dissatisfied to the point of leaving a relationship if sensual enjoyment is your sole concern - and when Rahu and Venus get involved, it most certainly is high on the list!

With conscious awareness, one can realize that no-thing and no one is going to fully satisfy that itch during the cycle. One would do better delving into what this hole they are trying to fill really is. Whether or not you attempt to fill it, is another matter.

Rahu corrupts, while the highest expression of Venus, in its exaltation of Pisces, is pure, unconditional love. Rahu’s influence on Venus, no matter the sign, will highlight some type of impurity, even if only through thoughts you would never act upon, while being fascinated by others' inappropriate behaviour.

This has been more problematic, historically, while still being a problem in certain societies today. Generally, however, we are living in a time when more, more, more is more acceptable. So, socially you can get away with a lot depending on where you live. You can even get away with rape, if you have sufficient power and influence.

Personally, however, dissatisfaction is just that, and no amount of trying to fill that hole will cut it.

Interestingly, recent reports about the sexual activities of a younger generation suggest they are having less sex, or are at least regretting having sex too early, such is the onslaught of sexual imagery on our screens.

Sex is complex, of course, not just an itch we sometimes need to scratch, but an emotionally and energetically fascinating act of will and submission.