Image created by DALL-E AI
​Saturn re-enters sidereal Aquarius on Jan 17, 2023. Saturn's initial peak into Aquarius in 2022 was merely a hint at the adjustments moving forward. New structures and systems are now likely to enforce bigger changes, building something new out of the wreckage of the old.

Does knowing that change is around the corner fill you with excitement or fear? Are they not two sides of the same coin? If you’re feeling fear, why not reframe it in your mind as excitement? If you’re feeling excited, do you think you would benefit from acknowledging any underlying fear?

​Saturn enters the lunar mansion within sidereal Aquarius called Śatabhiṣaj from Mar 14, leaving the themes of alliances in Dhaniṣṭhā behind for now. Once Saturn entered Dhaniṣṭhā in 2022, we saw alliances form and reform on both sides of an apparent divide. There has been the formation of the BRICS nations, including Brazil, Russia, India, China and South Africa, while the EU and NATO has reinforced its bonds. Saturn returns to Dhaniṣṭhā on Oct 15, 2023 for a brief period of reformation until Nov 23, 2023. It then re-enters Śatabhiṣaj on Nov 23, 2023, transiting here until Apr 6, 2024.

Saturn’s transit in Aquarius may help stabilize changes that are necessary, but it may also destabilize many things we thought were stable. Saturn in Aquarius is likely to bring many advancements in technology, for example, some of which will be welcomed; some, not so much.

Śatabhiṣaj highlights the apparent extremes between inclusivity and exclusivity. It’s a confusing lunar mansion, symbolized by an empty circle, representing the 'dark Sun'. It represents the inclusion of all apparent opposites. Themes of light and dark inevitably play a big part. This may mean some things taken as an advantage and advancement by one group, yet seen in darker tones by another. The case for and against mass vaccinations is likely to become a point of contentions again.

Śatabhiṣaj means '100 healers' or '100 demons', depending on how you interpret the word. These contradictory impulses are likely a big theme moving into 2023. It will be important to know the rules of the game if you wish to break or bend them. You may break the rules if you don’t understand them. Yet how else can you/we progress? If you/we are always sticking to the rulebook, nothing is advanced, right?!

Śatabhiṣaj is ruled by the god of the sea, Varuṇa, the Vedic god representing the underworld, the darkness of the hidden realms and secrecy, as well as cosmic realms and enlightenment. When the Moon transits Śatabhiṣaj for two and a half days each month, it's a good day for purification therapies and travel. When Saturn transits here for a whole year, it adds complexity to these areas. There is the potential for great advancement, but also some philosophical conundrums due to the unforeseen problems.
​
Rahu not only rules the sign Aquarius, it is also associated with Śatabhiṣaj in the planetary cycles. If you experience a Rahu period with your Moon placed in any of the previous lunar mansions to Śatabhiṣaj, themes of healing are more relevant for you. But this is just as much a healing of the mind as anything else.

Saturn’s involvement with Rahu as it transits Śatabhiṣaj can show a need to make concrete changes, for everyone’s benefit. Yet it’s darker themes of fear and suppression are also likely to take a firmer hold in 2023. Apart from the war and economic fallout, as well as further restrictions due to viral outbreaks, we're likely to see revolutions in certain parts in the coming years, including in Russia and China. As I write this in November 2022, the people of China are already beginning to revolt.

While Śatabhiṣaj is ruled by the ‘god of the dark skies’, Varuṇa, Saturn is often referred to as ‘the son of the Sun’. The term ‘dark Sun’ is apt for Saturn’s transit here. While Indra is the ‘chief of the gods’, Varuṇa is the ‘chief of the demons’. Light and dark themes are likely to play out in all kinds of interesting ways throughout 2023.

Śatabhiṣaj (or Śatabhiṣak) is what we predominantly think of (consciously, or not) when we think of Aquarius. It’s what makes the sign so complex and unusual. It promotes theme of inclusion, but disentanglement from the group at the same time. It’s all about social issues and society, but also the divisions that exist within society. 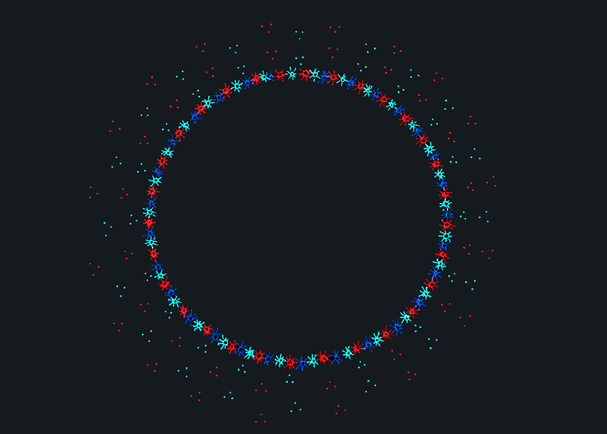 Illustration by Samir Mahmood
​
​The symbol of the empty circle is appropriate when it comes to the emptiness of a Saturn-type experience. Saturn is particularly powerful within this lunar mansion. It’s said to be in its mulatrikona, or ‘root strength’. The continued strength of the planet of maturity requires a mature response to the inevitable changes taking place on our planet. While the empty circle may be full of wonder and possibility for some; for others, it may induce fear and dread.

Saturn and Rahu have at least some things in common. One thing is resistance. Yet adding these two together creates a sort of resisting resistance, i.e., change. See if you can resist your own resistance and make the necessary changes in your personal life. The changes are coming, regardless. It just feels better when you feel you are consciously making the changes that are happening anyway. How we each change, and how we each feel about these changes, is an individual experience within a connected/disconnected global context.

Varuṇa as the ruler of the Night Sky in Vedic myth, the cosmic oceans, indicates furthering space exploration, one of the few things that binds us together as a global population.
​

Become a patron and read the rest, including a forecast for each sign.