Rāhu points us eagerly forward; sometimes, obsessively so, as we reach for new goals and attainments. But as we do so, Ketu points us back, to a past we cannot ignore, unless we are to continue to make the same old mistakes. Even if we are fully aware of our mistakes, we are likely to repeat them. Certainly, societies and nations are, as ancestral missteps are passed along to their descendants.

The nodes are appropriately symbolized as a head and tail of a serpent in Indian astrology, while the image of a serpent devouring its own tail, the Ouroboros, is apt. 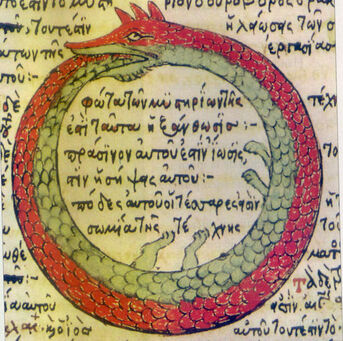 Ouroboros
The symbol of an entangled serpent or dragon represents a loop we get caught in. The more we struggle to get out, the tighter the bind. We cannot lie, cheat, or manipulate (Rāhu) our way out of it, as much as we think we can, and we cannot ignore it (Ketu), either.

Following the transit of the nodes allows us to make a bit more sense of the pattern we are stuck in, over time. How much we can change the pattern remains to be seen, but we can certainly make patterns more conscious - we can be a little more objective about them, at least.

As individuals, we can do much to change the story we have on repeat, a subconscious pattern we play on a loop. Whether we can change the essence of the story, or the soul’s need to live it out, again and again, is another matter. The soul seeks to repeat patterns until we are done with them, even if the mind and body are unwilling or unable. The soul keeps records and plays them joyously on repeat.
​

History doesn't repeat itself, but it often rhymes.

​
One of the ways we can begin to tune into the nodes' transits in signs is to see the last time they visited a particular section of the zodiac, in their 18.5-year cycle, to see some similar themes play out, in our lives and on the world stage.​​

​
Ketu in Scorpio: Healing Past Trauma
The power of Ketu in Scorpio is to remove fears and to heal past traumas. We may, however, be too eager to leave something unresolved in the past, something which festers if it is not dealt with fully. At some point, there is a reopening of the wound. Therapists refer to retraumatizing through repeated exposure. Either we ignore the problem and let it get infected, or we obsess over it and do not allow the scab to fully heal. Either way, we are left with a scar.

Ketu represents our default programming, in many ways. It’s what we seem to gravitate towards when under duress, what’s more familiar to us, an old pattern we get stuck in. It’s that thing we’ve always done and can easily fall back into when the going gets tough. But it also points to something we wish to move on from, even past lives, and all the baggage that entails, both personal and collective. If we ignore it, we are doomed to repeat it. Heck, even if we do acknowledge it, it may still happen, as we continue to keep it alive in our awareness. On and on it goes, life after life, death after death.

In September 2020, Ketu returns to Scorpio, triggering the solar eclipse which occurs on December 14, as the Sun and Moon join Ketu at the juncture between Scorpio and Sagittarius, the section of the zodiac known in Indian astrology known as gaṇḍānta, the ‘ending’ (anta) place in the zodiac where both solar and lunar signs end, where ‘knots’ (gaṇḍā) come undone before being remade anew, before we become anchored to something else.

These knots in the zodiac are highly volatile, as we have already seen in the recent Beirut explosion as Ketu transits through the Scorpio/Sagittarius juncture, bringing up the issue of negligence. Ketu certainly represents the possibility of negligence, but it also brings us back to our roots, spiritually speaking, removing things which stand in the way of this, including life itself many times. The destruction that is possible is shocking and uprooting, leaving many shaken to their core. For onlookers, all seems lost, left without an anchor, unless we can orientate ourselves to the spiritual, our essence nature and eternal Self.

The last time Ketu was in Scorpio was in 2002/2003, when we saw the invasion of Iraq by the United States, subsequent to the 9/11 attacks. Ketu wants to root out the problem and is more than willing and able to do so while in Scorpio. Ketu is seen by many as being exalted in Scorpio. It is also said to co-rule the sign along with Mars, so it is very much at home and willing to fight.

In 2002, there was the Bali bombing. Ketu intensifies Mars’ impulse in Scorpio, which is to destroy something, promoting secret activities and terrorist attacks. Rāhu, on other hand, points to blocks to Taurus on the other side of the zodiac, which includes luxury hotels, for example. The Marriott bombing in Indonesia in 2003 is another example, which occurred just as Rāhu and Ketu were finishing up their transit in Taurus and Scorpio.

Other events the last time Ketu was in Scorpio and Rāhu was in Taurus were riots and mass killings in Gujarat, India, while Israel began construction of the West Bank barrier. Chechen rebels seized a theatre in Moscow (again, Taurus relates to the arts), and the Guantanamo Bay detention camp was established, where untold horrors and torture have occurred since. Ketu represents hidden activity, all the more hidden and intense as it transits Scorpio, while Rāhu in Taurus shows the need to gain security and stability - by any means necessary.

Scorpio is our insecurity and vulnerability which we wish to rid ourselves of while Ketu transits the sign.

In 2003, the United States invaded Iraq and toppled Saddam Hussein, rooting him out from his hiding place. The ‘war on terror’ was a prime example of Ketu in Scorpio wishing to rid the world of terrorists, while Rāhu in Taurus promotes the need for peace – but with a heavy cost involved.

The only thing that Rāhu guarantees us is the need for something. We may create as many problems as we think we are solving in the process. These mistakes come back to haunt us in time. Eventually, the mistakes we make become the losses we must experience. The snake continues to swallow its own tail.

Become a patron and read the rest, including for all signs
Become a Patron!