By Gary O'Toole
Photography Cedric Klei
Ārūdha is a Sanskrit word to mean 'attainment', or 'mount', and shows what is being attained, a tangible thing that is achieved as a result of who we are and where we put our energy. So, for example, the 2nd house represents many things that are not tangible, including values, but to see something tangible in the 2nd house such as money we can look at the ārūdha of the 2nd house, to see what is attained.

These ārūdha positions reflect the relationship between the signs and their ruling planets. In the above example, the 2nd sign and its ruling planet will show the money one has attained or accumulated, while the 2nd house itself will show the way you approach money, what you value, as well as other, non-tangible things related to the 2nd house.

The most utilized of the ārūdhas is that of the first house or ascendant. You may have Aries ascendant, but depending on where Mars, the ruler of Aries, is placed in your birth chart, will show the end result of your ascendant, showing what you personally attain, as well as how others perceive you to have attained.

Think of it this way: your ascendant is how you look out at the world, how your intelligence operates, while the ārūdha of your ascendant shows how the world looks back!

The ārūdha of your ascendant, most often expressed as AL or Ārūdha Lagna - attained ascendant - shows the result of who you are, and the actions you take, taking into account your rising sign and where your ruling planet is placed.

The AL is very useful in seeing how you are perceived, the net result of your ascendant and where you put your energy, i.e. where your ruling planet is placed. Any planets placed in or influencing the AL, either in the natal chart or by transit, will show how your reputation is being impacted. ​


Planets Placed in the AL

Jupiter tends to protect one's image and reputation, either by transit or natal position. Nataly, Jupiter with the AL will show someone who seems knowledgeable, someone who teaches or gives advice.

Rāhu (Moon's north node) exaggerates one's reputation, and not necessarily in a good way. Rāhu ​can show scandals and controversies.

Ketu (Moon's south node) may suggest not being seen, as well as being perceived as an unusual person, an outsider, just as with Rāhu, but possibly not as controversial. Ketu with the AL in the birth chart can show someone who is seen as using a different language to everyone else, maybe a computer language, or a secret, spiritual, or other worldly language. Either way, these people are seen as unusual.

Saturn decreases or sullies the image and reputation. If Saturn is placed with the AL in the birth chart, the person may appear serious, detached, and maybe even mean, even if that is not how they see themselves or wish to be. Remember, this is the result of who you are and what you put your energy into. If Saturn is in dignity it may not be as harsh, but it will still cast a cold eye over one's image and how others perceive you, creating a less-than flattering view.

Saturn's impact on the AL can be particularly troublesome, so it is a good idea to propitiate, such as the following mantra for Viṣṇu:
​
Om Śrīṁ Viṣṇave Namaḥ

Chant this mantra to appease Saturn if it is currently transiting over your AL or if Saturn is placed with your AL in your birth chart as an ongoing experience. The mantra is for the god of sustenance, which is also seen to purify the effects of Saturn.

If Sun is with the AL, it shows a noble person, someone who may appear to be a leader, powerful and maybe even domineering, depending.


So, how so you calculate the ārūdha ?

While there is an easy way to do so, there are a couple of exceptions to take note of.

The calculation is done by counting from the house in question to the planet which rules it, and then counting the same again, all inclusively.

Let's take for example the ascendant and how to calculate the AL or attained ascendant.

Here is an example of the AL in a chart. 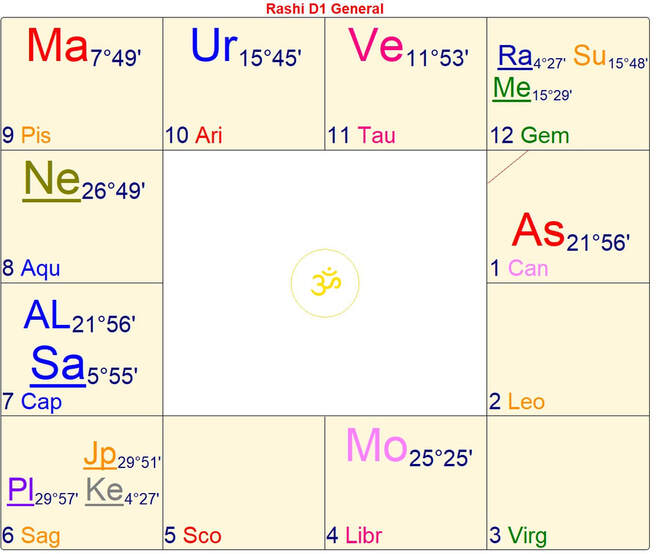 ​
​Count from the rising sign Cancer to the ruler of Cancer, the Moon. Counting from Cancer to Libra inclusively, you end up 4 signs away. This shows where this particular person is putting their energy, in the home, finding happiness, or in education, for example. Now, count the same again, i.e. 4 signs from Libra, and you end up in Capricorn, where this energy is reflected in the world. This is where we find the AL (see above chart).

This is a hypothetical chart but if someone were born with this line up, Saturn would impact their reputation throughout their life, especially in cycles of Saturn. Although Capricorn is a strong and dignified position for Saturn, there person will not get away with anything fanciful; instead, there will be a need to be accountable at every turn.

If someone had this chart, it may be a good idea to chant the Viṣṇu mantra given, to clean up the person's image.


Controversy
Now, here is a topic of debate and controversy in the astrological community. There is an exception that is used by many astrologers - probably most as far as I can see - that the ārūdha cannot be in either the 1st or 7th from where you started the count, as it is seen that the reflection cannot be in the same place, or opposite.

While the first exception, i.e. having the AL in the first house seems logical to me and is clearly stated by Indian sage Parasara, I have not seen the 7th house exception work as well.
​
As with many things in astrology, I like to use both, to keep an eye on both possibilities and interpret them both. I find that both seem relevant.

Here's the same chart if I were to include the above exception. 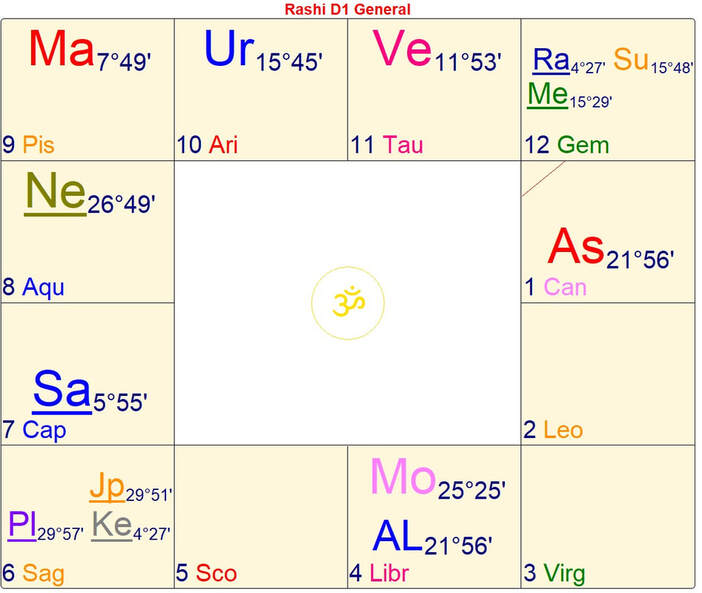 ​
​The 2 exceptions are as follows:

1. Whenever the ruling planet is placed in the sign itself, the 1st house, you count 10 signs from there. The 10th sign is the highest in the chart and shows the mount, what is attained.

If someone has the sign Taurus rising, for example, and Venus were placed therein, you would count 10 signs from there to Aquarius. Likewise, if someone had their ruling planet in the 7th, you would count 7 from there back to the 1st and have to count 10 signs from here again, ending up in the 10th house. This makes sense and is clearly laid out in Parasara's text. A reflection must reflect somewhere and cannot be the same sign.

Using the above chart as an example,  the AL has now ended up with the Moon in Libra. According to the exception, if you end up in the 7th from wherever you started the count you must count another 10 signs from here.  So, the AL in Capricorn would end up in Libra in this example.

I have not found the 7th house exception to work as well, and I'm not alone in this.


Scorpio & Aquarius
When counting from Scorpio or Aquarius, keep in mind that these signs are ruled by two 'planets'. Scorpio is ruled by Mars and Ketu, while Aquarius is ruled by Saturn and Rāhu.

When calculating the ārūdha for these signs, you would count to the planet which is placed with more planets, and leave out the planet placed alone. Again, I have found using both calculations to work.

One thing you may note is that the ārūdha cannot be in the 2, 6, 8 or 12 houses from wherever you count.

These are the 'invisible houses', and therefore, you cannot use them for a calculation based on perceptions. You literally cannot. Try it. If you count from any house to the ruler and the same count again, you will never end up in any of these houses.

Here is an example of someone we all think we know well. Below is Donald Trump's chart. The first chart is when we use the exception rule. The second when we don't.

Which do you think suits him more, AL in Scorpio with Ketu and Moon, or AL in Aquarius? 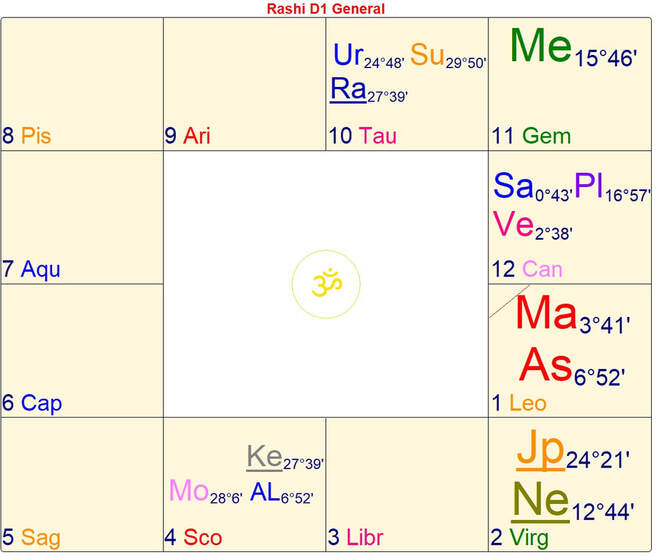 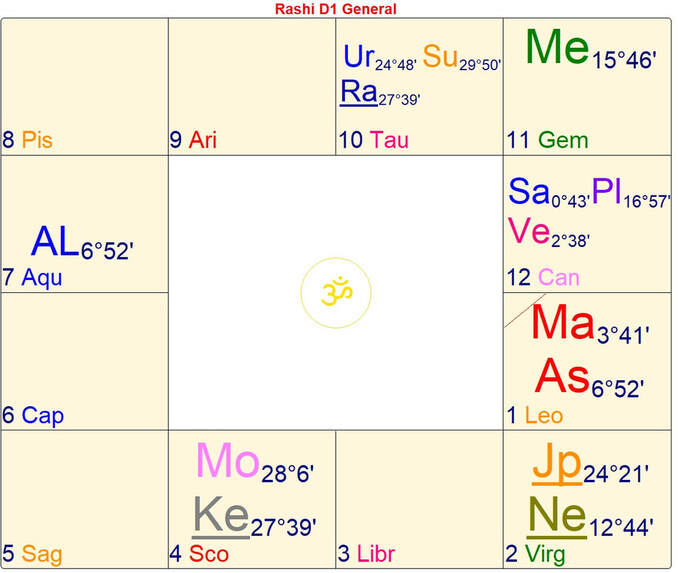 ​
​Do you think one suits him more than the other? Or would you use both?

Answers on a postcard. Only kidding! Your options for Donald Trump are either Scorpio or Aquarius. Scorpio has Ketu and the Moon placed therein, which would show how we view him. Remember, this is all about perception.

Remember, the ārūdhas are tangible things, so you won't be looking for intangibles. You have to be able to see the thing in question for it to be of any use in interpretation.

Another very important ārūdha is that of the 12th house. The 12 house is the house of loss, which is actually used to see the spouse. Why loss? Well, the idea is quite simple when you think about it: the spouse is someone you are willing to give to, to lose yourself in. If you are not willing to give, it is not likely to be a long term relationship.
​
This is usually written into the chart as UL which stands for Upapada Lagna. Upa means the 'closest’, i.e. your partner. It could be written as A12 but is usually written as UL. ​

Here is a list of all the ārūdhas and some things each represents:

A1 or AL You, your reputation, your image and appearance
A2 Possessions, wealth, food and family (accumulated stuff)
A3 Siblings, short trips, communications of all kinds, including that hastily written email!
A4 Home, vehicles, land and mother (things that make us happy)
A5 Children, fame, sporting achievements
A6 Competitions, obstacles (perceived ones, anyway), debts
A7 Partnerships (romantic and business)
A8 Loans, inheritance
A9 Father, teachers, long travels
A10 Status, position, career, professional attainments
A11 Elder siblings, income, gains, awards, friends and associates
A12 or UL Long-term partner, foreign travel