An East-West Integrative Approach
By Gary O'Toole
(Published in Timeline Astrology Magazine 2019 Edition)
​​
Most of my readings begin with a description of the Zodiac. I explain why I use the Sidereal Zodiac, most often used in Jyotish, or Vedic astrology, to my mostly Western clients, more familiar with their Tropical Sun signs.  Both Zodiacs are valid, of course. How can millions of people around the world be wrong?

But the question that quickly follows is: How can both Zodiacs - using calculations that vary by 24 degrees at present - be right?
​My short answer to this is that each Zodiac is right for something, and on some level. The Tropical Zodiac is symbolic and can be used to see the rich symbolism of astrology in our lives. The Sidereal Zodiac is closer to the actual constellations we refer to when we speak of Aries, Taurus etc., and is more useful for practical matters.

The Sidereal Zodiac also points to another dimension of star signs, or 'lunar mansions' known as Nakshatras. These offer further interpretations and an intricate interplay between solar and lunar signs which divide the Zodiac in equal parts.

​Some astrologers even use the actual astronomical positions of the constellations, dividing the Zodiac into unequal segments. For me, the use of a calibrated tool, using equal parts of either Sun or lunar signs, works most effectively for timing – much like a clock.

​Let’s take the recent 'Me Too' campaign as an example of how the Tropical and Sidereal Zodiacs could be used to interpret transits. The campaign took off in October 2017, just as Jupiter entered Tropical Scorpio.

We can clearly see the power dynamics of sexual abuse due to our expanded awareness with Jupiter in Scorpio, while issues of inequality were highlighted due to Jupiter’s concurrent transit in Sidereal Libra. That same month, we saw Saturn enter Sidereal Sagittarius, Jupiter’s sign. Jupiter may have brought the awareness, but Saturn had more of a say in removing the ingrained and outdated thinking.

​By looking at Saturn’s position in the lunar mansion, Mula, placed at the beginning of Sidereal Sagittarius, we can see how Saturn showed the need to pull up all the hidden aspects involved by their root. The word Mula is literally translated as ‘root’, showing the need to uproot the established order when transited by Saturn. Pluto in Tropical Capricorn offers another explanation of this phenomenon.

Both Zodiacs clearly point to what was going on, but in different ways, and on different levels. Jupiter in Scorpio showed what was talked about; what we were aware of i.e., power and sex, while Jupiter in Libra revealed practical issues dealing with inequality.

Now, although keeping an eye on both Zodiacs helps us to get a 3D picture of any given situation using transits, integrating these perspectives does not mean one should have one foot in either Zodiac while reading horoscopes. This would lead to messy astrology practice and unfocused readings.

If you went to a yoga class and started applying what you learned in Pilates, not only would you have the yoga instructor correcting you, but you may also go awry as you are instructed through a yoga sequence which is built upon certain alignment principles. It is not that Pilates is wrong in this instance, but that the alignment cues for Pilates do not fit into a yoga sequence - even if they borrow techniques from one another. The same can be said of Vedic and modern Western astrology.

​​I have noted over the years that when I see a birth chart of someone with the same sign rising in both Tropical and Sidereal Zodiacs (there is a 5 or 6 degree overlap possible), they seem to be more obviously that sign. So, if someone was born with the late degrees of Tropical Aries rising, they would have the early degrees of Sidereal Aries rising.

​I propose that because Sidereal calculations are closer to the actual constellations, and deals with practical matters, it is therefore more relevant for use in physical characteristics. In this case, the Sidereal rising sign would show the actual physical appearance of the individual.

When I first had my horoscope calculated by a Western astrologer, using the Tropical Zodiac, the time I was originally given by my mother was sometime in the morning, around 9.00 am. My Tropical chart was calculated with the sign Scorpio rising. A few months later, the astrologer had changed to Sidereal calculations.   In the meantime, I received my correct birth time of 12.53 pm and had my Sidereal chart calculated using the new time. The rising sign was still Scorpio!

​What if I had received the correct time in the first instance and had the sign Sagittarius calculated for my Tropical chart? Would I have followed astrology so closely with a different sign?
​Yes, of course, because I can just as easily identify with Sagittarius as I do with Scorpio – but in different ways. Sagittarius is symbolic of how I operate on a certain level, certainly; my love of freedom and of travel, as well as my philosophical nature. However, I am more physically Scorpio rising; a typically lean ‘Mars type’, while secrets have formed the bulk of my life experience.

​Parasara describes Scorpio as having a ‘slender’ and ‘hairy’ physique (Sharma, 1994). Although only a general indication, this is certainly true in my case. Planets in the rising sign will show complexion and will not usually change between Sidereal and Tropical calculations. 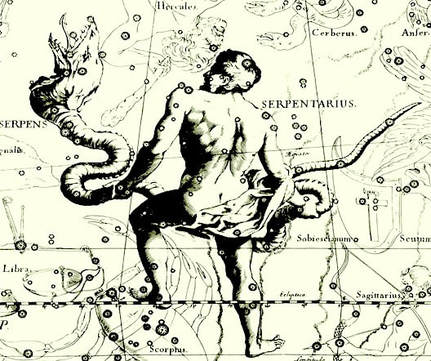 Hevelius, Firmamentum, 1690
I can add a third ‘sign’ into the mix as I was born with Ophiuchus rising too - the so-called '13th sign' of the Zodiac, which is a constellation and not one of the 12 traditional signs. There are many constellations, of course. Astrology, East or West, has always used signs, dividing the Zodiac into 12 equal parts.
I strongly identify with the symbolism of Ophiuchus; the ‘serpent bearer’, having spent my life struggling to contain the Kundalini Shakti (primal energy), which can become destructive for those with Sidereal Scorpio rising.

​The end of Sidereal Scorpio is where we see Ophiuchus and the lunar mansion Jyestha, ruled by Indra, the chief of the gods; the deity that compels us to take control of our earth-based desires; to elevate us higher on a spiritual quest. This has been the main theme of my life.
In recent years, I have noted that some Vedic astrologers have challenged the use of the Sidereal Zodiac and have taken to using the Tropical Zodiac within the interpretative techniques of traditional Jyotish. And while I have kept an open mind about these calculations, I have not seen them to work as effectively as Sidereal calculations for Jyotish. One drawback of using the Tropical Zodiac within traditional Jyotish is the calculation for ‘planetary periods’ and the commonly used Vimshotari Dasa (‘120-year’ cycle), calculated from the Moon. While you may be able to argue that Tropical Sagittarius describes my character as much as Sidereal Scorpio, what you cannot argue is how my life has unfolded. This has been the case in relation to my Sidereal Moon position.

​Vedic astrologer Vic DiCara has come up with a solution for this. He has kept the lunar signs Sidereal - so planetary periods remain the same but has removed the Sun signs from Sidereal calculations; to give them Tropical placements. This pulls apart the lunar signs from the solar signs, and all the intricacies of these when combined.

Uranus, Neptune and Pluto are not visible to the naked eye and were not discovered until recently in a historical context. Therefore, they are not included in traditional Jyotish. They are often referred to as the ‘outer planets' by astrologers. They are constantly influencing us - like a background hum - which is why they may be 'transpersonal', i.e., we may, at times, tune out of their influence due to the constant transmission.

​These three impulses are always influencing us, representing something closer than our own breath. When these ‘invisible’ planets connect with a visible planet, their influence becomes more obvious. And yet, anyone who spends time studying their natal positions and transits could not deny their relevance on an ongoing basis.
​But herein lies a problem for many Jyotishi. If they do not include them, they will never be open to experiencing how they could use them alongside traditional methods often substituting the north and south nodes of the Moon, Rahu and Ketu, to explain certain phenomenon; missing out on a multi-layered analysis by using all of them.

​Although I do superimpose the outer planets for my interpretations, I do not give them 'rulership' of signs or dignity based on position. This would muddy the waters of Vedic interpretations, and the perfectly intricate model using 9 Grahas (‘graspers’), or ‘planets’, 12 solar signs and 27 lunar signs.

Let’s look at Pluto in relation to its transits through both Zodiacs. Pluto moved into Sidereal Sagittarius in 2005, and then into Tropical Capricorn in 2008. Observing its Tropical transit, we can certainly see the need for change in governments the world over since the economic crash of 2008.

​From a Sidereal perspective, the actual breaking down of the establishment truly begins once Pluto moves into sidereal Capricorn in early 2020 and for the following two decades. This follows on from a dip in ethical behaviour and religious fundamentalism, as seen in Pluto’s transit in Sidereal Sagittarius since 2005. This has brought an altered state of perception and an intense awareness of what is fake, as well as the darker aspects of those that lead us.

In one sense, Pluto in Tropical Capricorn is breaking down the establishment, but it has been more of an idea, as we are prepared for the actual changes to come. Once it moves into sidereal Capricorn, this will become very real indeed. ​

So, how do we approach the ‘problem’ of the two Zodiacs?

Here is what I would suggest: Study one in-depth and work with it until you are an expert. Keep an open mind to other points of view, without substituting the integrity of your chosen Zodiac.

​From time immemorial, people have influenced each other from different cultures, using various points of view.

The sharing of knowledge has sped up thanks to the internet; however, we just may have to reign in our wandering minds and stick to our tried and tested techniques when helping clients who probably couldn’t care less about the Zodiac being used - they just need clear guidance.