​By Gary O'Toole
“History doesn’t repeat itself, but it often rhymes”
– Mark Twain

​
It’s June 2022, and Rahu has just entered the Scorpio 9th division of sidereal Aries, with Ketu moving into the Taurus 9th division of Libra. These are the debilitation signs for the lunar nodes according to Parāśara.

Ketu in Libra was part of the signature for the Wall Street Crash of 1929. Its current transit in the Taurus division reflects the underlying weakness in the economy, a loss of even the basics. Rahu in the Scorpio division is exaggerating doom and gloom predictions. Its transit here until mid-August 2022 shows some dire predictions indeed, some of which are likely to be a case of catastrophizing. It may not be as bad as it seems.

With that in mind, I have set myself the task of researching economic trends, specifically stock markets crashes, to see some astrological patterns. I did see one in particular that stood out (see below).

Rahu represents greed, and ‘bull markets’; Ketu, losses, and ‘bear markets’. Although it’s a lot more complicated than that, this is a good place to start examining market trends. Hint: one of the trends I spotted included one of the nodes!

Greed eventually leads to losses. Whoever may win initially, it’s not sustainable, especially if they do so at the expense of others. A typical scenario is a business taking on one too many risks, buying other businesses out and then going bust.
​
Astrology helps us see the trends, the ups and downs, and plan accordingly. Even if you cannot do anything about global trends, you can at least get ahead of the curve, whether it’s a peak or dip. 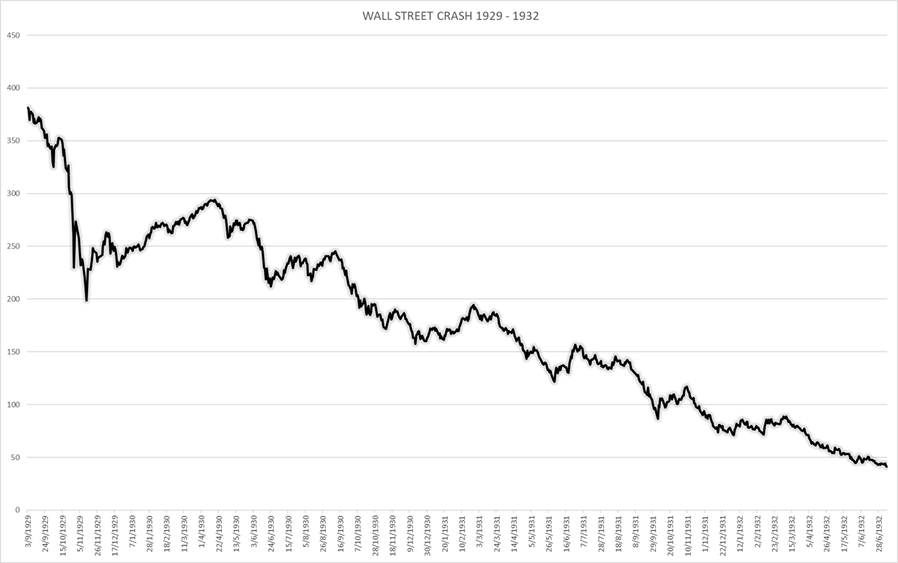 ​
​Historic Stock Market Crashes
Forecasting future stock market crashes and economic trends is much like weather forecasting. It’s easier to predict closer to the time, although even predicting the weather has become a lot harder these days due to climate change!

I studied the planetary alignments for all the stock market crashes since the turn of the last century and observed one quite striking trend. While each crash occurred for many different reasons; thus, the astrology is different in many ways, there was one configuration that cropped up more than any other; that is, a conjunction between Mars and Ketu.


“The farther back you can look, the farther forward you are likely to see.”
― Winston Churchill


Now, I realize that stock market is not literally the same as the economy. We clearly saw the difference between the two in 2020 and 2021, with Rahu in Taurus and Jupiter in Capricorn. This reflected the stark contrast between spikes in the markets, but with many losing jobs and struggling to survive.

What we’re seeing now is hyperinflation, reflected in the Jupiter-Neptune conjunction in Pisces. Although Jupiter is strong in its own sign Pisces, it is hemmed in between malefics either side. Saturn in Aquarius and Rahu in Aries seems to be squeezing the life out of Jupiter, and inflationary trends up even further.

Once Saturn moves back into Capricorn by mid-July, we may see a lessening of this, but with Saturn then aspecting Jupiter with its 3rd house aspect. This may see the beginning of the inevitable, and necessary, recession following hyperinflation.

By mid-decade, Saturn will join Neptune in Pisces, where Jupiter is now. This may show a deflationary trend after inflation. But as Saturn joins Neptune, Jupiter is hanging out with Uranus; first, in Aries, and then in Taurus. The last time Jupiter met with Pluto, Neptune and Uranus was between 2007 and 2011, when we saw one crash after another. This is especially the case as Pluto is transiting Capricorn, Jupiter’s sign of debilitation, followed by Jupiter’s conjunction with Neptune in Pisces, showing the inevitable extremes of hyperinflation after a downturn.

Venus must also be observed for economic trends and has quite often been in Virgo, Venus’ sign of debilitation, during a market crash (see list below).

Here are all the major stock market crashes since 1900, with just some of the astrological configurations at the time:

Become a patron and read the rest