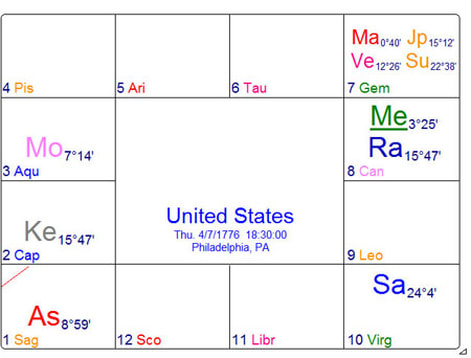 America has elected Donald Trump to be the next president. With hindsight we can see the perfection of this outcome. This result is a reflection of where America is at, more than anything. So why now, and why Mr. Trump?

America recently began a cycle of Rahu, the north node of the Moon, the northern eclipse point. It began this 18 year-long cycle at the end of 2015.
​
When tracking the effects of Rahu in any given chart, we must track the current eclipses to see the results. The last solar eclipse was on September 1 and was placed at 15 degrees, at the very center of the sign Leo. This degree is crucial in relation to timing the recent election outcome and the triggering of the current Rahu cycle for the US chart (pictured).

In November 2016, as we approached the election, Rahu transited 15 degrees of Leo, the very degree where we experienced the eclipsed Sun on September 1 2016, in the 9th house of the chart, representing what the country believes - or not, as is the case with the north node. We can see this influence as a complete upheaval in the country.

Rahu has been strongly triggered in the American chart and, even though we have seen many 'Rahu-type' occurrences in the country of late, i.e. divisiveness and unsettling events, the shadow has been brought into the open. Rahu is placed in the countries 8th house of change and instability, in the sign of home and security, Cancer. What happens when you bring the shadow into the open in relation to these aspects? An individual playing on people's fears, of course.

So what is Rahu, then? Rahu is an eclipse. It is literally a shadow which creates an eclipse. It represents our own shadow, both individually and collectively. The shadow is the part we deny, which only makes its influence stronger. Someone comes along and says all of the things we deny ourselves, and the result is, we are taken over by it. We become transfixed, like a snake is by a snake charmer.
​The mythological story in the Vedic tradition is of that of the deceit we can experience under Rahu's influence. Vishnu, here pictured disguised as Mohini, is throwing a discuss at the demon Svarbhanu, who tricked his way between the Sun and Moon, thus causing an eclipse. This split between the head and body, creates a feeling of coming undone, unsettling us in the process, creating all kinds of fears - some real, many more delusional.

Interestingly, the recent American election has seen much of this trickery and deceit, which echoes the deceit of the Brexit referendum. This has been the theme that has played out the world over, in governments and leaders, represented by the sign Leo, the ruling class, where Rahu is transiting in 2016/17. Rahu is the head, without a body; a hungry head with no body to satiate. It is hungry for power, and never more so when placed in Leo, or influencing the ruler of Leo, the Sun. Other mythological stories such as Medusa come to mind. The Greek myth of Medusa, with snakes for hair (Rahu is depicted as a snake in the Vedic tradition), turns those who look upon her into stone. This is symbolic of the frozen in fear response we experience as a result of shocking events, represented by Rahu, the north node of the Moon.

In any reports on Donald Trump we could just as easily replace the word Trump with 'Rahu'. But let us not get carried away here. Donald Trump is merely playing a part in a bigger story.

Rahu in Leo creates the scandal, the shock and the subsequent feelings of instability in governance, and this is felt by everyone being governed, i.e, everybody else. Rahu is unpredictable, ambitious, unusual, an outsider, heartless, obsessive, compulsive and fearful.
​These are just some of the words used to describe what is, in essence, the very worst of humanity when pushed to the extreme, to the fringes of society, when one feels like an outsider (whether that is in fact true or not).
Jupiter and Rahu are opposite in many ways; Jupiter representing dharma, doing the right thing, and Rahu representing adharma, going against anything natural or righteous. Jupiter is Rahu's antidote. It's like being bitten by a snake and the poison starts to take hold, and along comes someone with the antidote to the venom.

​But what if the person with the antidote is the same person that administered the venom in the first place?!

I have heard from clients who have changed from a Rahu cycle to Jupiter, and how it changed their lives completely; flipping them over and sending them on a completely different path. That clear Jupiter path was only reached through the thicket and confusion of Rahu. We must acknowledge the confusion, the fear and divisiveness. One client described the transition from a Rahu cycle to a Jupiter cycle as if 'taking off a blindfold'. Rahu blinds us. Rahu in Leo blinds us with the need for power. Jupiter brings a flash of insight, of wisdom, desperately needed in times of chaos. ​

My favorite expression of this transition is from Seamus Heaney's poem Anything Can Happen:

Anything can happen. You know how Jupiter
Will mostly wait for clouds to gather head
Before he hurls the lightning?
​
Here is a sign of great change in 2017 and beyond: a total solar eclipse, visible through central America, symbolically cutting the country in two! 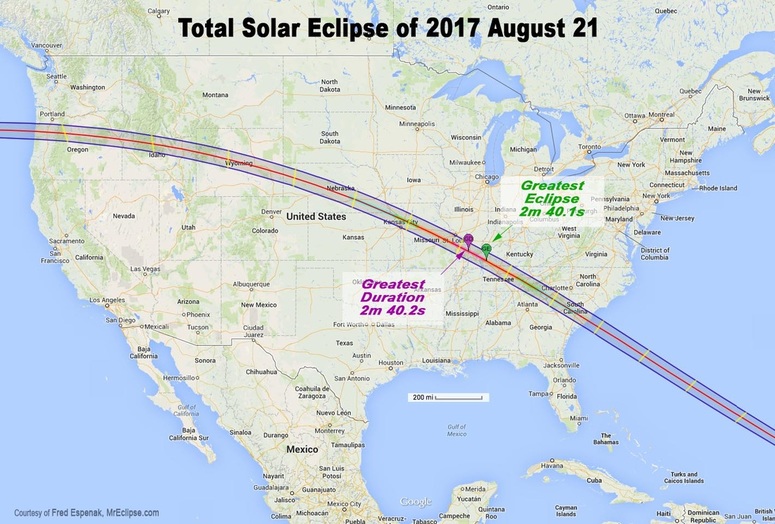 ​America continues to experience the divisive influence of Rahu for the next 17 years! It won't always be this intense, but there will always be a flavor of it mixed in there somewhere, working in the background. The eclipses themselves bring out the qualities of the cycle. There will always be ambition to do better (to be great again), but Rahu doesn't always deliver the goods. Sometimes it just supplies the want. And even when you get what you want, this is merely felt as a temporary relief from wanting. What remains with Rahu is the desire to be all powerful, to go against the grain, and upset the status quo, to create many new avenues and possibilities while leaving old ways of doing things by the waist-side. Out with the old, as it were.

The next solar eclipse occurs in Aquarius in February 2017. Eclipses bring out the shadow to be seen, to be acknowledged. This occurs on February 26 2017 at 14 degrees Aquarius, but is triggered by Mars' transit before then, in late December 2016. This is opposite the September eclipse in Leo at 15 degrees. This is a particularly volatile period for the US and the world, as well as a stressful time for Mr. Trump. As well as these transits, he experiences Saturn's transit to his natal Moon, opposite his natal Sun by the end of the year, and again in 2017. The pressure on him will be immense, but we he doesn't buckle that easily. He may overreact and lash out childishly, and we must expect the unexpected with the next round of eclipses in 2017. If there's one thing we can expect with eclipses, it's the unexpected.

The following solar eclipse occurs in Leo on August 21 2017; this time very near Mr. Trump's ascendant at 6 degrees of Leo. This eclipse is pictured and symbolically spits America in two, reminding us of Svarbhanu​ and Medusa. Events that change the course of the country's history are even more pronounced in 2017 because a) America is now within a Rahu cycle, and b) this total eclipse is visible in America.

More change is forecast in the next few months. But there is much change to be experienced in America for many years to come.

​There will be many twists and turns in the ongoing saga as Americans venture into the unknown.