Homosexuality in the vedic horoscope

By Gary O'Toole
Sexuality is a complex and sensitive topic to broach in an astrological context and consultation. It is, however, a very necessary topic to deal with when clients seeking guidance for themselves, or their loved ones, require some insight and help in accepting sexuality as a spectrum.

Oftentimes, there are feelings for someone of the same sex without the individual identifying as 'homosexual’. There are periods in a person's life when these feelings may arise. These can be seen in the Vedic horoscope by examining 'planetary cycles'(1) - if indeed these feelings are imprinted in the horoscope to begin with.

As an astrologer, I explain horoscopes in terms of breaking them apart for the sake of making a point, without necessarily putting them back together in a more holistic way for the reader. I trust that by reading this article you realize this is done in private consultation. I would like to make certain points about homosexual indications, so I have identified some key components in the Vedic horoscope. They are just components, and not the full picture. None of them on their own indicate homosexuality, and the absence of any one of them does not mean homosexuality should be ruled out.

There are, however, some very definite pointers to homosexuality, and these require further investigation if there are a confluence of such indications. Initially, the 7th house of relationships, and its ruling planet, must be examined, of course. But we must add the 3rd and 11th (the other kama or 'desire' houses), particularly in relation to the 9th harmonic or divisional chart, known as the Navamsha or D9, used extensively in Vedic astrology.

To begin the analysis, we must first look at the natal chart for clues. If the 7th house ruling planet, Mars, or Venus are retrograde, for example, then sexuality may not be straight forward (pardon the pun!). We could begin the analysis by examining the positions of the Sun and Moon: the masculine and feminine principles.

For Carl Jung, the 'contrasexual' (2)​ archetypes, the anima in men and animus in women formed the basis of his theory on homosexuality; in that a homosexual identifies more closely with the parent of the opposite sex. The polarity of sexual attraction is for the same sex parent, as the unknown other - the qualities of which one wishes to develop.

We could begin the investigation of this theory by looking at the position of the Sun and Moon for both sexes, to see the relationship to the masculine and feminine principles. We could then examine Mars and Venus, which represent masculinity and femininity as an immature expression of the higher principles of the Sun and Moon. All of these indications are important to study for both sexes.

Some Things to Consider
If the Sun is placed in a feminine sign or debilitated, AND the Moon is placed in a masculine sign or debilitated, we could further investigate the horoscope. Of course, these indications alone are not enough to conclude homosexuality. We must see other indications, including the role of the ‘neuter’ (3) planets, Saturn and Mercury.
​
Rahu and Ketu, the nodes of the Moon, are an important factor in considering how homosexuals react to a sense of being rejected by society. Many are seen as outcasts from early childhood, and the rate of suicide among young homosexual men in particular reflects this.

Those who have been deemed outcasts may react in shocking ways (Rahu represents shock), while many others renounce society altogether (Ketu represents renunciation). Many homosexuals end their lives through the anguish of rejection, while many more become skilled in working with their primal energy, or Kundalini Shakti (4).

9th Divisional Chart
If the topic of sexuality is brought up in a consultation, there is, of course, ample reason to investigate further, whether or not there are any indications of such in the natal chart.  If we looked into the 9th divisional or D9 chart we may see some indications of homosexuality due to the influence of Saturn and Mercury. This may jar with some of the indications of the natal chart, and the individual may be challenged to accept their feelings for the same sex.

The D9 chart divides each solar sign in the natal chart into nine sections - each 3°20’ section of the natal sign representing a different sign in the D9 chart. This gives us another chart to examine for issues relating to sexuality. This is examined alongside the natal chart, as well as a separate chart to study on its own.

The focal points in relation to sexuality in the D9 chart are the 3rd, 7th and 11th houses. If Saturn or Mercury have an influence on these houses, then we can be more assured that homosexuality requires further study and wise counsel.

Some Vedic astrologers have indicated that if Jupiter also has any influence on these areas of the chart, then it cancels out the indications of homosexuality, as Jupiter represents traditional marriage between a man and a woman for the purpose of raising children. In my experience, this does not mean that feelings for the same sex do not exist, but that the individual may not express these outwardly; preferring instead to raise a family with a partner of the opposite sex. While the indications of the neuter planets must be strong for homosexuality to be relevant, it remains to be seen if a strongly placed Jupiter can nullify all homosexual inclinations. I have not seen this in my years of consulting clients coming to terms with homosexuality.
​ 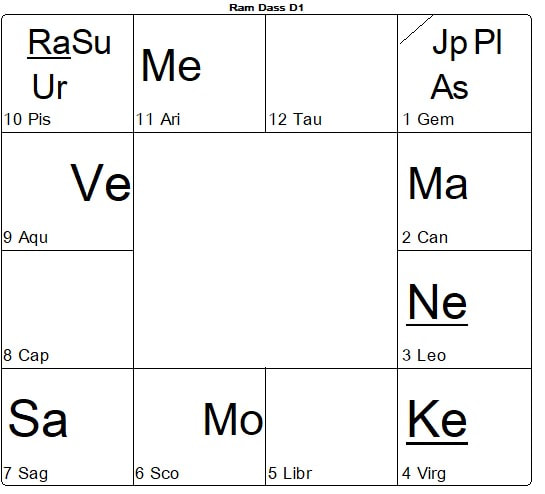 ​Chart Analysis: Ram Dass
Ram Dass, born Richard Alpert, is a well-known spiritual teacher and author of Be Here Now. He identified as homosexual later in life, although he privately expressed his feelings towards the same sex throughout his life.

Firstly, let us examine his relationship to the masculine and feminine principles in his natal chart. The Sun is placed in the feminine sign Pisces, while the Moon is debilitated in Scorpio, in an exchange of signs with Mars (Mars rules Scorpio, as per Vedic analysis), which is also debilitated, in Cancer.

We can then examine the 3rd, 7th and 11th houses in his natal chart. In Vedic astrological analysis, sign aspects (5) show a constant influence between signs and between any planets placed therein. In his natal chart, Jupiter is placed in Gemini, neuter planet Mercury’s sign. The 11th house is ruled by a debilitated Mars, and Mercury is placed therein. Saturn is placed in the 7th house, opposite to Jupiter: the 7th house ruler. We now have something to investigate in terms of his sexuality because of the confluence of homosexual indications, despite Jupiter’s dual sign aspect on the Sun as 3rd house ruler, and on Saturn in the 7th house. This we do with the D9 chart. 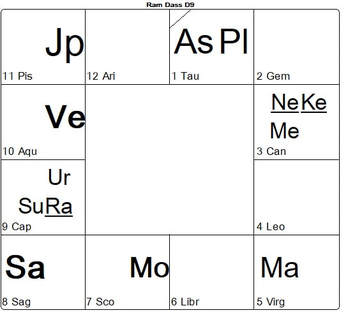 ​In the D9 chart, we must again examine the 3rd, 7th and 11th houses to see a more in-depth picture of his sexuality. Mercury is placed in the 3rd house, and the Moon is again placed in debilitation in Scorpio - this time in the 7th house. Mars, the 7th house ruler, receives dual sign aspects from both Jupiter and Saturn, showing mixed results. He has had relationships with both sexes and has fathered a son; although he did not know of his existence until later in life (Mars rules the 7th house and is placed in the 5th house of children).

Jupiter has a particularly strong influence in both the natal and D9 charts. This would ordinarily indicate a traditional approach to sexuality. However, Saturn’s placement in Sagittarius in both charts influences Jupiter by its sign placement and sign aspect. He was born in a Saturn cycle when the natal Moon’s position in the lunar sign Anuradha (6) is taken into account.  This indicates a strong Saturn influence form the start.

He has kept quiet about his desires for the most part, as the Moon rules the 3rd house and is placed in the 7th house, in secretive Scorpio. He has had relationships with men his entire life, preferring to keep a particular long term relationship with a man secret for the sake of the privacy of his partner.