the state of ireland 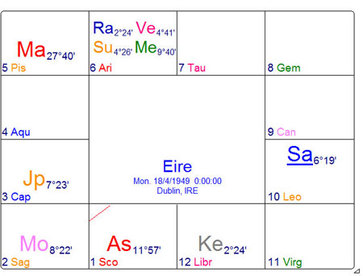 ​Ireland April 1949
​
At midnight on April 18/19 in 1949 Ireland officially left the British Commonwealth, as a 21-gun salute on O'Connell Street in the capital ushered in the Republic of Ireland.The Vedic horoscope pictured represents this moment in time, and is an indicator of the country's subsequent timeline.

First of all, the chart has the sign Scorpio rising at midnight in Dublin. Scorpio is a mystical sign, representing hidden aspects of life. Ireland has this quality about it, as there is so much that is hidden behind closed doors - behind the veil, as it were.

Scorpio deals with intrigue and sexuality but it may appear otherwise, and those with the sign rising may preach about the virtues of chastity, but live very different lives!
​
​
Jupiter in Capricorn
The planet Jupiter represents faith and optimism and is placed in its weakest position in the chart I have posted for analysis. It is, thankfully, more powerfully positioned with closer inspection, and is seen to be in the sign of Pisces in the 9th divisional chart. This points to an underlying strength in the country's faith. No matter how tough the situation, there is always a sense of hope underlying the realism of Jupiter's position in Capricorn, which represents a more pessimistic outlook generally, or at the very least, an attentive optimism.

Having Jupiter debilitated in Capricorn and uncomfortable in the 3rd house creates a double-negative for the country, which leads to a more positive outlook overall - a double negative.

The Moon in the chart sits in Jupiter's sign, Sagittarius, and is the ruler of faith and optimism (9th house). This again points to an apparent weakness and an underlying strength for the people's faith.

Jupiter in the 3rd house represents our inability, or lack of wanting, to fight, and Jupiter's weak position here points to the fact that we are largely a neutral country when it comes to war. The 3rd house represents the ability to stand up for ourselves. It shows the arms and hands, ready to take action. Jupiter is a 'gentle giant', and has an impulse which does not like to be positioned in the house of fighting.  This suits priestly individual's but not a harsh, dog eat dog, world. The saying, 'to have the courage of your convictions' does not, on the whole, apply to Ireland. Again, this is the outward expression of Jupiter which, at closer inspection, shows a hidden strength of character.

Jupiter in Saturn's sign points to the fact that we now have to deal with the practicalities of life, having no time for the more philosophical concerns. These concerns are left high and dry in the sign Capricorn.

Where is mystical heart of the country hiding?

It has all been about the financial situation lately and this has left little room for Ireland's mystical heart.


Jupiter Period 2012 - 2028
I write about Jupiter specifically because it has been particularly relevant for Ireland in the last few years, and will be for many more to come. Ireland has just entered a 'cycle of Jupiter', triggering Jupiter's weaknesses/strengths in the chart. This began in November 2012. Jupiter's period lasts 16 years, although there are different phases within this period. We are currently experiencing a sub-period, or phase, of Jupiter within a longer Jupiter time period (2014), and so it is more intensely felt as a Jupiter time-period overall. This began in November 2012 and continues until January 2015.

There is usually an event that triggers a new time period, whether in a country's or an individual's horoscope. Jupiter's apparent weak position was triggered from the beginning of this November 2012 period. By taking a closer look at the specifics of Jupiter in this chart we can see what is currently relevant.

Jupiter rules the signs Sagittarius and Pisces which fall in the 2nd and 5th houses of this horoscope. The 2nd house represents finances, values and family - the 5th house represents creativity, children and spirituality. As I have stated, Jupiter is weakly placed at first glance in this chart, and all of the above suffer during Jupiter's time period as a result.

A major trigger event which showed the influence of a debilitated Jupiter occurred in November 2012, when a woman died in an Irish hospital because the option of an abortion was not available to her. Jupiter represents children. This began the debate about abortion in the country and grabbed the nations attention. The abortion debate continues.

The issues around financial difficulty, lack of creativity, childcare and family care, all continue during this time period. More and more families are left homeless having to be housed in hotels due to a lack of family support and housing.  This is also due to Saturn's current transit as the 4th house ruler.

The good news is that the 3rd house is a place of growth and improves with time. We can look forward to the situation improving during this 16 year long time period. More good news on the way is that Jupiter is about to move into its place of exaltation (greatest strength) in the summer of 2014, and for the following year. This places Jupiter in the opposite position to where it was in 1949. The summer of 2014 until the summer of 2015 adds new hope and a deeper sense of connection for the world at large. As strong as the transit may be for the world, due to Ireland's weak Jupiter beginnings, it can only reap a certain amount of benefit from Jupiter. But we will take and cherish all that bountiful Jupiter has to offer!

Jupiter is currently transiting the 8th house of joint resources in Ireland's chart. This places more of an emphasis on money from other countries and we have experienced the benefit from international aid as a result.


Rahu Period 1994 - 2012
I returned to Ireland in 1994, after a period of living in London for a few years. I could sense a change in the country upon my return - a new way of being. It was a hedonistic period in my own life, and this was evident everywhere I looked. The period from 1994 until the current period of Jupiter, was that of Rahu, the Moon's north node and an insatiable and exaggerated impulse, creating a need for worldly experience. Ireland had already begun to loose its way by this time. Appropriately, these years were known as the 'Celtic Tiger' - referring to a period of excess: In mythical stories the 'shadow planet' Rahu sits astride a tiger!

Looking back to this period we see Rahu placed in the 6th house of debts. Rahu is in Aries, a fire-dominant sign. It exaggerates wherever it is placed, and is airy in nature. The words, balloon, air and hot spring to mind! It was a period of excess in borrowing for most, but it was all just a lot of hot air. It all had to come to an end at some point. That time began to rear its head for some years before 2012, but these years were merely a lead up to the current more realistic time in Irish lives.

Rahu is placed alongside the Sun, Mercury and Venus in the chart, particularly activating Venus. Venus represents partner countries and expenditure in this chart. With hindsight we could see where all of the spending and wheeling and dealing was headed.

Rahu always leads to Jupiter in this planetary order. In other words, excesses of any kind leads to wisdom eventually. We need to have our fill first, and then we are wiser for it. We are at least a little wiser despite Jupiter's weakness and we have learned a valuable lesson.  The country is going to have to knuckle down and get on with it for some time to come. We have to learn to stand up for ourselves when faced with bigger fish and find new ways of doing business on the international market, as well as our local market. Family and community needs a boost, as do our creativity and our children's welfare.


Future Trends
Things are looking up somewhat for the country. We can at least count our blessings in many regards, even if this is only possible when we compare our situation to that of so many countries in the Middle East, for example. Many countries are experiencing immensely difficult periods. These periods have been triggered recently due to some intense transits. These transits continue in 2014.

The major shifts occurring this year for Ireland are Jupiter's move into exaltation in June 2014, giving us somewhat of a boost. Saturn's transit to the first house in November 2014, along with Jupiter's influence from the 9th house of good luck, will bring a much needed balance of hope and realism moving forward. The country will be able to make real what they hope to achieve moving forward, but it will take a lot of hard work also.

We begin a phase of Saturn within this long Jupiter period from the beginning of 2015 until the summer of 2017. Saturn will be transiting the 1st house during this time, leading to a long, hard look at itself. This sees a more realistic approach to our confidence on the global stage, as well as our own foundations as a nation. The housing crisis is going to have to be dealt with more effectively. We will need to be mindful of what we're being told and how the housing crisis is managed in the future.

We may have to sober up even more once any false hope and optimism have been shown for what they really are.