By Gary O'Toole
Photography Patrick McManaman
It's always interesting to me to see both Tropical and Sidereal analysis when planets move to 6 degrees of a Sidereal sign, as this means they have just entered the next Tropical sign. This is currently the case for Jupiter (May 2021), which is now placed at 6 degrees of Sidereal Aquarius.

In this case, Jupiter has just moved into Tropical Pisces, and most Western astrologers are getting very excited about it!

Some are more reserved in their deliberations, as they know Jupiter doesn't make it very far into the sign, before it backtracks from mid-June and returns to Tropical Aquarius by Jul 27, as it leaves Shatabhisak and re-enters Dhanistha. Jupiter will then move back from Sidereal Aquarius to Capricorn later in the year, by Sep 14.

What's even more interesting to me is when planets move to 6 degrees and 40 minutes of particular signs in the Sidereal zodiac, moving into the following Tropical sign, and a new lunar mansion.

This is the case for all the signs which have lunar mansions split evenly between two Sun signs: Mrigashirsha, Chitra and Dhanistha. These are the three lunar mansions associated with Mars.

Mrigashirsha is split evenly between Taurus and Gemini, leaving 6 degrees and 40 minutes of the lunar mansion within Gemini. Likewise, for Chitra in Virgo and Libra, and Dhanistha in Capricorn and Aquarius.

Whenever a planet leaves these lunar mansions, it not only changes lunar mansion but also Tropical signs. This occurs in the three air signs, Gemini, Libra and Aquarius.

I've noted over the years many instances where Western Tropical astrologers refer to events highlighted by certain planets in signs as occuring towards the end of the transit. This is because the planet has just moved into the sign in the Sidereal zodiac and is placed in the same sign in both for a time, for the first 6 degrees of the Sidereal sign.
​ 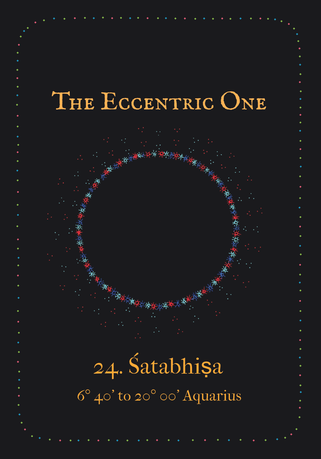 ​Shatabhisak
Jupiter has just moved into Tropical Pisces and therefore it has just entered Shatabhisak within Sidereal Aquarius. So we are likely to see some shift in the coming days and weeks around the themes involved.

Shatabhisak is symbolized by an empty circle, and can be translated as either '100 healers' or cures, or '100 demons' or diseases. An empty circle encompasses all possibilities, of course, including all apparent paradoxes. Shatabhisak is ruled by Varuna, the deity of the vast depths of the oceans. You can see where I'm going with this!

Pisces is of course symbolized by the ocean. While Jupiter transits Shatabhisak, it transits Tropical Pisces, bringing out similar themes of connection, of depth, and mystery, but also all the apparent paradoxes and contradictions. An empty circle holds all possibilities, as does the cosmic ocean.

Planets transiting here can bring confusion, of course. How can something be this way and that? How can this and that be true?!

Shatabhisak is a philosophical sign, and one that is good for healing and magick, as well as travel, including space travel and inner journeys. This lunar mansion is associated with Rahu, which connects it to other kinds of trippy journeys, i.e., taking drugs and hallucinogens.

Jupiter's transit can mitigate these tendencies, or expand on them, depending.

It will be interesting to see the correlations with Jupiter's transit expanding on all the themes of Shatabhisak in the coming weeks, and to see how astrologers use both the Tropical and Sidereal zodiacs to explain these unusual experiences.


​
Jupiter Retrograde
Jupiter will return to Shatabhisak in the New Year, due to its retrograde back into Dhanistha from the end of July, and until then. Jupiter is retrograde from Jun 20 until Oct 18.

When planets move back to a sign they have already left they don't really give their full impact in the sign until they re-enter it later.

It's as if they arrived to the party having forgotten to bring something and must return for it. When they do return, they are actually more prepared for what's needed at the party, and may actually bring more to the table.

This is significant when we look at any planet's return to a sign, but in terms of Jupiter's entry and re-entry into Shatabhisak, the sign of healing, this is particularly significant in terms of a treatment for the current virus. But Shatabhisak is also about healing the mind.

Jupiter is spending only a brief period this summer in Shatabhisak, before it returns with more ingredients by Jan 2, and until Mar 2, 2022.

This may be the time when healing is taken to another level, as Jupiter will move through the whole sign of Shatabhisak, and on into the next sign Purva Bhadrapada. It will then move into Sidereal Pisces by the following month, when Jupiter is placed in both Tropical and Sidereal Pisces by Apr 13, 2022. This just so happens to correspond to the day the lunar nodes leave behind the uncertainty and fears of the Taurus/Scorpio axis.

This is a much more hopeful situation, as Jupiter transits a lunar mansion AND a Sun sign it is said to rule, i.e. Purva Bhadrapada and Pisces. This can double up on the strength of Jupiter, from a circumstantial, emotional and spiritual perspective.
The Sun will be ready to move into Aries by that time as well, its sign of exaltation, after a period of Mars being exhalated in Capricorn, conjunct Saturn and Pluto, which will likely blow things up and bring them out into the open. Then, Mars move into Shatabhisak by mid-April.

After a winter that will likely see more waves of the virus, and more uncertainty, we are all going to be in a much better place by April next year.

For now, we must keep the faith and remain hopeful as something new is introduced, some other possibility explored. And while this may not become fully clear until next year, at least we have something to be more hopeful about.