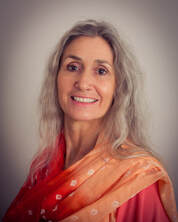 ​​Marianne Jacuzzi founded Seven Winds Yoga and Jyotish in Dublin, where she taught yoga classes, training and workshops from 2000 until 2017. In recent years, she has retreated to Sardinia, though she continues to lead workshops and retreats and teach yoga philosophy, pranayama and meditation for teacher-training courses.  A Vedic astrologer and spiritual counselor, she gives astrological readings in person and via Skype. Her consultations can reveal to clients the unique karmic forces active in their lives and help them to channel those gifts to realize their highest potential. She also offers a year-long course in the foundations of Jyotish for committed yogis drawn to this empowering Vedic Science and yearning to take their spiritual practice deeper.

The eternal truths of India first inspired Marianne at a young age. Discovering the Bhagavad Gita while still a schoolgirl in California, she began meditating with Maharishi Mahesh Yogi in San Francisco when she was sixteen. Later, she studied Indian Philosophy at the University of California, Berkeley and Santa Cruz. She has a BA and an MA in English Literature from the University of California, and published a novel, Blood Memories, in 2008. She has three grown sons and three young granddaughters.

Her yoga practice began in the Sivananda tradition, with meditation, chanting and devotional practices as important as asana. However, with a strong background in dance, she felt drawn to Iyengar Yoga, with its emphasis upon precision and alignment. After moving from California to Ireland in the early 90’s, she studied Iyengar Yoga with Elizabeth Connolly in Dublin, who introduced her to Ashtanga Yoga in the late 90’s. It was not long before the power of Ashtanga Yoga completely captivated her. For about eleven years, she maintained a strict daily practice of Ashtanga Yoga and travelled many times to Mysore to study directly with Sri K. Pattabhi Jois.

But her personal practice began to evolve around 2009 to 2012, the combined richness of the those three foundational schools, along with an internal transformation and a few extraordinary Indian masters—all coming together to give birth to her own fluid style of practice, which she developed and called Shakti Rasa. Shakti Rasa Yoga incorporates breath and meditation into powerful asana work that raises the frequency of the subtle energy body. Since her teaching has always flowed from her personal practice, she began offering classes in Shakti Rasa as well. Having done teacher training in Sivananda, Iyengar, Ashtanga and Vinyasa Krama Yoga, she is Yoga Alliance certified at the highest level: E-RYT-500 and is also a Yoga Alliance continuing education provider: YACEP.

Alongside her daily practice of yoga, her study of Indian philosophy continued also. With eminent yoga scholar Georg Feuerstein, she completed over a 1000 hours of course work in yoga philosophy. With Buddhist priest David Brazier (Dharmavidya), she studied Buddhist psychotherapy for over four years in the UK. She incorporates techniques of Zen therapy into her work with clients and continues to be inspired by this teaching.

Fascinated by Jyotish for a long time, she began to explore more deeply the uncanny power of this major yet poorly understood Vedic Science. The study of Jyotish has been her central passion since 2009. After much reading and personal study, she began formal mentoring in 2011 with Dennis Flaherty, President of the Council of Vedic Astrology. She completed over 1200 hours of study for the CVA, qualifying as Jyotish Visharada and then as Jyotish Kovid. She has studied with other great Jyotishis as well, both Western and Indian. As her Jyotish practice continues to grow, she offers consultations in person and via Skype.

Her year-long course in the foundations of Jyotish includes in-depth yoga practice for experienced yogis, spiritual counselling tailored to the individual, and a comprehensive introduction to the basics of Vedic Astrology, enabling students to understand the dynamics of their own life path with liberating clarity.

The most significant event in her spiritual evolution traces back to 2003 when she met her ultimate guru, Ramesh S. Balsekar. Ramesh accepted her as his disciple in 2005, and until his mahasamadhi in 2009, she travelled regularly to Bombay to the satsangs he gave from his home. His teaching of Advaita Vedanta, so profound and yet so simple, transformed her. The wisdom of Ramesh informs her teaching, her practice, and her personal life. A lifetime of seeking found resolution at the lotus feet of Ramesh, and for absolute peace revealed so clearly, to him she is eternally grateful.

For more information about Marianne and her work, visit her website www.sevenwindsyoga.com
​