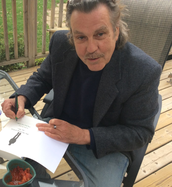 John Fyfe is the recipient from India of the Jyotish Kovid, a prestigious award given for service to others in the field of Vedic Astrology. John has taught Astrology and Palmistry courses and workshops throughout Ireland, the U.K. and the U.S. as well as in Canada. He gives Astrology/Palmistry sessions at various yoga centers, alternative bookstores and Body, Mind, Soul Expositions. You can find his talks on YouTube and link to his blogs on Facebook.
​
In the mid 1980s’ at the age of thirty, he took his first trip to India and spent a month in the Himalayas, learning about meditation and yoga. After that exhilarating experience, he then returned to India every winter for the next twelve years. Five years later, he began his study of Vedic Astrology with Professor Choudhry.

​V.K. Choudhry is the pioneer of the Systems Approach to Vedic Astrology and John soon came to see that his style of Vedic astrology was unique in its ability to pinpoint the strengths and weaknesses of planets in a person’s chart. He found the analysis of the systems approach more clear and concise than any other system he had seen during his first five years of self-study.

When doing sessions, he often works with the Vedic Astrology Chart as well as your Palm Print. He compares the strengths of planets in the chart to the planets that can also be seen in the palm, confirming much. He then looks at your Heart, Head and Life-line, and the most important Destiny Line. All of this gives me a full picture of what is going on with you!

For more about John and his work in Vedic astrology and Palmistry, you can visit his website www.therealjohnrfyfe.com