Pañchāṅga: Measuring the ‘5 Limbs’ of Time
​

By Gary O'Toole
Artwork by Samir Rana
​The 5 limbs of time correspond to the 5 elements: fire, air, water, earth, and space. The 5 visible planets, Mars, Saturn, Venus, Mercury, and Jupiter relate to each one of five elements, and thus, each of the 5 limbs of time - in that order.
​1. Mars & Fire

​The day of the week is represented by the fire element, which relates to Mars, our energy and vitality. Each day of the week has its own energy, based on the planet which rules it. This energy is broken down into 24 hours each day, and each hour relates to a certain planet and energy as well. When both are taken together, we get a feel for the energy in any given hour, on a particular day of the week.

The day of the week you were born on says a lot about your energy levels and vitality. The Graha or planet that rules the day of the week is seen as an important planet for your health and vitality. Its position and strength in your birth chart should be studied, including any influences from other planets, to see the overall impact.

Each of the 7 planets of Indian astrology rule a day and an hour, beginning at sunrise on a particular day. The same planet which rules that particular day of the week, rules the first hour after sunrise. So, the Sun will rule the first hour after sunrise on Sunday, the Moon on Monday, Mars on Tuesday, etc.
​
Some astrologers use a 6.00 am start time all year long, regardless of the actual time of sunrise. The table below marks each hour as 1, 2, 3 etc, so you can decide on which you would prefer to work with. 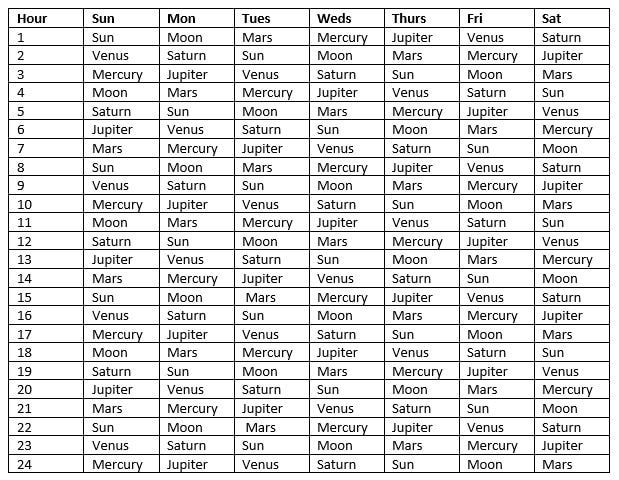 The Sun signs divide the 360° circle of the zodiac into 12 sections of 30°, while the Moon further divides it into 27 sections of 13 degrees and 20 minutes (13° 20'). Some lunar mansions or ‘Moon signs’ are contained fully within one Sun sign, while some Moon signs bridge two Sun signs. Both the Sun and Moon signs come to an end at three different places in the zodiac: the end of Cancer, Scorpio, and Pisces.
​
The lunar mansion the Moon transits on any given day relates to Saturn and the air element and shows how the energy flows on any given day, in your mental and emotional, as well as prāṇic (energy) body. It shows what is in the air that day, i.e., what the mood is like on any given day. 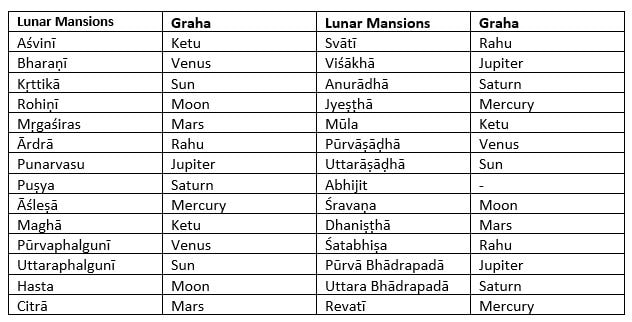 This is calculated based on the degree of separation of the Sun and Moon and is calculated by subtracting the degrees. Although the Moon moves 13 degrees and 20 minutes each day, one lunar mansion, the Sun moves a degree a day, which means the Sun and Moon are always either separating or coming together by increments of 12 degrees.
​
Each lunar month has 30 lunar days, as each lunar day is shorter than the day of the week, or solar day. These 30 days are divided into the dark and bright halves, when the Moon is moving towards, or away from, the Sun - 14 'bright' days and the full moon and 14 'dark' days and the new Moon.

​Each lunar day is associated by one of the 9 planets of Indian astrology, in the order of the days of the week. Rāhu, the north lunar node is added at the end. Ketu, the south node is not included.

The planet which rules the lunar phase you were born under, as well as the element (table below), says a lot about how you approach relationships in general. This must be examined along with the 7th house ruler and Venus as well, while all of these indications together give you a fuller picture of your relationship needs.

The fire element tends to disrupt relationships due to excessive passions, while air tends to create emotional volatility. The overall element in relationships is water, so if you mix fire or air with water you can get a sense of the issues. Earth is a good container for water, of course, and tends to sustain relationships, while space is another container, literally 'holding space' for someone. If the water element itself is indicated, then you may see emotions overcome you, whether these are helpful or not.

​Each lunar day is divided in half, to arrive at a karana; kar meaning ‘to do’, or ‘to cause’, representing how we do things, and indeed, what we do. This is the ‘to-do list’, and is associated with Mercury, which represents the most practical element, the earth element. Specifically, the planet which is associated with this half lunar day will show how we go about doing anything. The half lunar day active when you were you were born is studied along with this planet, to see how you approach work. Examine this planet in your birth chart along with your 2nd, 6th and 10th houses, all of which relate to work.
​
As each lunar day is 12 degrees, the difference between the Sun and Moon each day, the Karana must be half of that, i.e., 6 degrees. Therefore, there are 60 of these each month, twice that of the lunar days; 30 in the bright half of the lunar month, and 30 in the dark half.
​
Each of the 7 Karanas repeat 8 times throughout the month. The planets associated with each runs in the order of the days of the week. These begin with Bava, during the second half of the bright half of the lunar month. 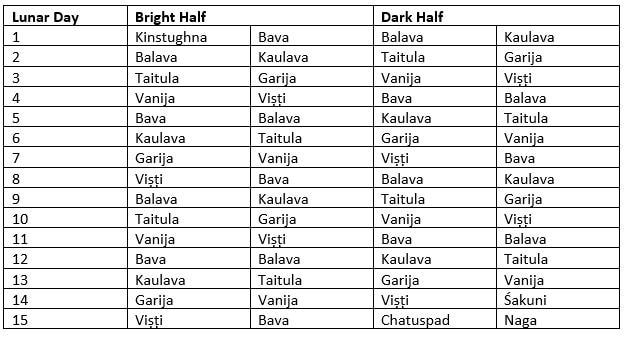 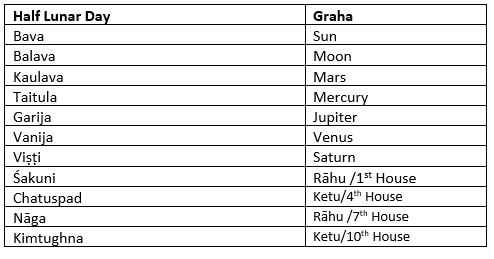 ​There are four other Karanas which are associated with Rāhu and Ketu, the lunar nodes. These occur just before or after the new and full Moons. Some authors state that Śakuni is ruled by the ascendant ruler, Chatuspad by the 4th house ruler, Nāga by the 7th house ruler, and Kimtughna by the 10th house ruler.

​The word yoga means ‘union’ or ‘yoke’, which in the calculation of the limbs of time represents the union of the Sun and Moon, by adding the degrees of both each day.

The Moon transits one lunar mansion a day, a distance of 13° 20’, either towards the Sun or away from it, indicating 27 different relationships between them. This links the air element of the lunar mansions, to the space element of the Sun and Moon’s combined degrees, as air moves in space.

​Some of these yogas are less advantageous for holding things together, which is what yoga refers to in this case. These less auspicious, and thus, less binding combinations are the 1st, 6th, 9th, 10th 13th, 15th 19th and 27th. All other yogas or combinations are seen as more auspicious for activities which require coherence and unity.

The element of space is linked to this particular limb of time, and Jupiter is the planet that is associated with space; as in, Jupiter holds everything together – in space. That is quite literally the case, of course, as Jupiter is the largest of the planets, exerting a huge gravitational pull, so that it does not orbit the Sun exactly; instead, both the Sun and Jupiter orbit around a point in space.
​
Each of the planets are associated with 3 yogas each, just as they associate with 3 of the lunar mansions. The list given below begins from Puṣya, which is associated with Saturn. The planet which is associated with the yoga each day will show how well you can hold things together, be it a relationship, or whatever. The planet which rules a particular yoga is called the ‘Yogi planet’. This planet shows prosperity in your birth chart, as growth and prosperity require coherence and order, which is why Jupiter rules abundance. This changes daily so, depending on the yoga that was formed between the Sun and Moon when you were born, this will show which planet is a powerful unifying force in your birth chart.

​Whenever you put an ‘a’ before a word in Sanskrit, it is usually not a good indication! It indicates the negation of that thing. In this case, it is the negation of unity, i.e., disunity and incongruence.
​