By Gary O'Toole
Photograph: BBC
Prince Andrew has been accused by Virginia Roberts Giuffre of having sex with her when she was trafficked at 17. If he were on trial in the court of public opinion he has surely already lost his case.

Despite the backing of the Queen, Prince Andrew has never had a gleaming reputation. Loss of reputation is a theme in his birth chart. Ketu is in Pisces, where we find his Ārūḍha Lagna.

The Sanskrit word Ārūḍha means ‘attainment’ or ‘mount’. The Ārūḍha Lagna or AL is a special ascendant (Lagna) which shows how tangible results from the ascendant. Any planets in, or aspecting, his AL will impact him very personally.

Ketu removes things, of course. It is quite clear – if that’s something that could be said of Ketu – that he has never been a public favourite, apart from the Queen’s, I guess. She has always stood by him and continues to do so. But while his position and backing may be enough to keep him out of prison, it is not enough to save his reputation. Ketu will likely destroy it. 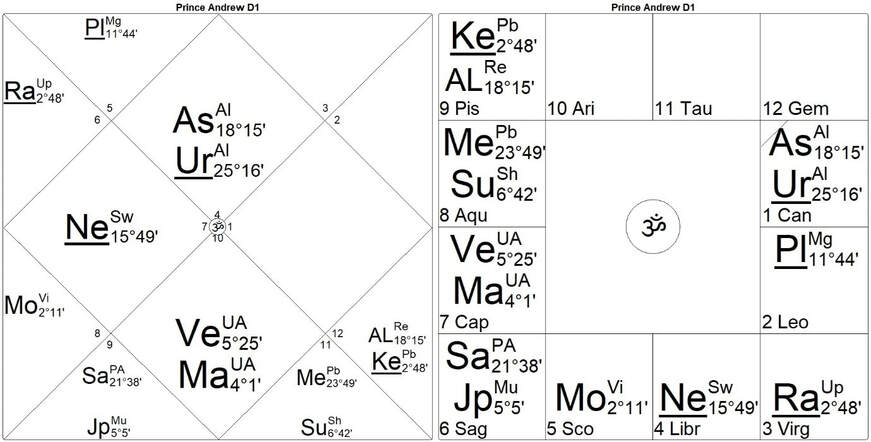 Prince Andrew was born 19 Feb 1960 at 15.30 in London, UK. AA Rodden Rating.
Rahu and Ketu form a Kāla Amṛta Yoga in his birth chart, with all the visible planets on one side of the nodes, moving towards Ketu. Although this may be referred to as a ‘spiritualizing’ configuration, it is many times a combination that shows a loss of worldly success to promote such a re-orientation. We must keep this in context, of course. Prince Andrew’s position and upbringing would challenge ever becoming a renunciate. And yet, his position as a royal has always been tenuous. It now seems to be unravelling at the seams.

The AL is calculated based on the position of the chart’s ascendant ruler. It shows how someone applies their intelligence, as an indication of the ascendant. The AL is how we see him, based on the decisions he makes. The Moon is his ruler and is debilitated in the 5th house of children. Need we say anymore?! To find the result of this, we count from his Cancer ascendant to the Moon in Scorpio. We then count the same amount of signs from the Moon. Counting five signs from Scorpio we arrive at Pisces, at Ketu. You can also count from the planet in question, to the sign it rules, a technique called Graha Ārūḍha, which shows this from the perspective of the planet. This would reflect how we see him, as a reflection of his ascendant. Counting from the Moon to the ascendant and the same again, this is the same as his AL. Not only do we see him as Ketu, but he also views himself as Ketu. Yet how we view Ketu may be very different from his own perceptions.

Ketu may show someone we perceive as unusual, an outsider that doesn’t fit in. Ketu may represent a mystic or someone who seems ill adjusted to society. Either way, he might view himself as an outsider, reacting impulsively because of this.

Ketu is everything; thus, it can be anything - from states of enlightenment, to states of delusion and confusion. It shows someone who is not thinking. Yet this could be an enlightened being or someone who just doesn’t think. Ketu in Pisces shows all these possibilities, I guess. I have no idea what the man is like in private. The AL is about his public persona.

Sign aspects to Pisces have a say, as do transits which impact his reputation at different times. The 7th from his Ketu is where we find Rahu, of course. Rahu can show controversy in the area of relationships. Rahu in the 7th from the AL could show a renunciate or a sex scandal, depending. Either way, Rahu in the 7th distorts.

Jupiter and Saturn aspect from Sagittarius. Their conjunction in Dec 2020, in his 7th house, is another important piece. Jupiter’s natal aspect may protect him to a degree, but Saturn removes some of that protection. Saturn’s current aspect from Capricorn, from 2020 to 2023, is particularly challenging. Saturn will transit Pisces from 2025. Any protection afforded him, as Jupiter transits Pisces in 2022 and into 2023, is short-lived.
​
Whatever the outcome, the AL shows our perception of him. It is a useful tool in interpreting the lives of public figures.

Below are Prince Andrew’s current planetary and sign-based cycles:

Rāhu-Ketu in the 3-9 axis is also found in Ghislaine Maxwell’s birth chart (see Notes on a Scandal Part 2), although different signs. The 3rd house relates to sexuality. Rāhu placed therein shows the possibility of greed and deception, manipulation. Ketu in the 9th can show a lack of discernment, removing access to wise council. Or perhaps it is an inability to listen to such. Rāhu-Ketu in this axis can show someone’s inability to listen in general, even if there are those around dishing out sage advice. Rāhu blocks the 3rd house, expressing his opinions in sometimes catastrophic manner, as was the case in his now infamous BBC interview. While Ketu may remove blocks, sometimes, it removes the very thing he needs; in this case: sound advice.

While he is likely to try and distance himself from the case, there is no denying the damage this has and will continue to do to his reputation.

There are some striking features in his chart when we take these in the context of his life and the current lawsuit. His ruler, the Moon, is debilitated, almost by exact degree. Although both Venus and Mars mitigate this due to their placement in an angle from his ascendant, Mars is ruining it because it is in the 7th house. Mars and Venus form a tight conjunction in his chart, showing a passionate nature that could easily lead to destructive actions. This is a particularly challenging placement for the Moon’s ruler, Mars. Mars in the 7th destroys the areas of the chart it associates with, including Venus. This is called Marana Karaka Sthana in Indian astrology. The destruction takes in the sign it is placed, as well as the signs it rules and associates with.
He is currently experiencing a Venus-Mercury cycle, which changes to Venus-Ketu by May 2023, and for the following year. Venus is challenged by its conjunction with Mars in the 7th. Mercury is the ruler of his 3rd and 12th, placed in the 8th, reflecting the secretive nature of his desires.

The upcoming Ketu sub-cycle will likely be an uncertain transition period, before beginning a major Sun cycle in 2024. The last time he experienced a Sun sub-cycle, in 2008, was when his friend Jeffrey Epstein was imprisoned for 18 months after being charged with solicitation of prostitution with a minor. Prince Andrew’s continued association with Jeffrey Epstein may come back to haunt him in the years that follow.

The transits do not help his reputation. Although Jupiter may protect his name due to its transit in Pisces from Apr 2022 until Apr 2023, the timing of his Ketu cycle along with Jupiter leaving Pisces behind is likely to see this protection leave.

Add to that, Rāhu’s transit to Pisces from Oct 2023 until May 2025, during which time it will meet with Neptune (exact Feb 2025), and we can see the possibility of his reputation being dragged through the mud. Although many of the details may be lost in the murk, Saturn’s entry into Pisces in 2025 is likely to lower his public image all the more.

The fact that he is being accused of having sex with an underage girl points to Mars’ challenged position in the 7th house of relationships. Mars rules the 5th house of children and the 10th house of action. Even if he is found not guilty of committing a crime, one can certainly question his actions and associations.

This is another piece of the overall picture, a picture that is now being taken down from public view.

I will take a look at Ghislaine Maxwell’s birth chart in Part 2.