By Gary O'Toole
​Calculations are based on the sidereal zodiac.

​If you have been following recent news reports from around the world you will notice a growing number of natural disasters, rioting and a general sense of unrest.

Jupiter's entry into Sagittarius alongside the Moon's south node (Ketu), Saturn and Pluto expands on themes of destruction, adding fuel to the fire. Jupiter is currently transiting the lunar mansion at the beginning of Sagittarius called Mula (literally, 'root'), which is ruled by the goddess of death, Niritti. Will we get to the root of the problem? Jupiter in Mula suggest we will at least understand more of the root causes, but because of its conjunction with the southern eclipse point, we may be in the dark as to how to move forward, especially as Saturn and Pluto edge closer together into the New Year, reflecting further chaos and disorder.

Saturn and Pluto came within 3 degrees of each other earlier in 2019 and by January 12, 2020 they will conjunct by exact degree. Historically, the lead up to this conjunction has been very challenging, as pressure is mounted on borders and boundaries, as well as established structures and systems (Saturn), to make the necessary changes (Pluto). But what we initially see when systems, or anything, is threatened, is a tightening up of control; as we/they try to maintain order, whether this is at borders or in systems or governments that are faltering, or in our own lives when we feel the pressure to change.
​
2020 will likely be a year of reforms. But this is just the beginning of a process that has taken years to get to this point.
​ 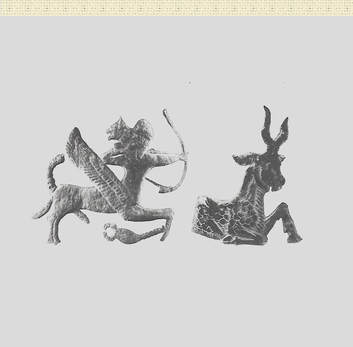 Image by Samir Rana
Sagittarius + Capricorn
The signs in which this conjunction occurs shows general themes. Saturn and Pluto conjoin at the very end of sidereal Sagittarius and then move into Capricorn soon after, so we are seeing this impact both signs and the lunar mansions involved. Generally, Sagittarius represents law and order, religion and truth, as well as the economy. It's a fire sign but we also find the lunar mansion, Pūrvāṣāḍhā here which is ruled by the goddess Apas, the goddess of water, who usually grants optimism, exuberance and joy; that is, unless Saturn and Pluto are visiting! Their transit here in 2019 reflects the destruction from both fire and water, and a general sense of 'doom and gloom'. Saturn and Pluto are both seen as tamasic in Vedic thought, a word which means 'dark', 'resistant' and 'inert', reflecting the current sense of doom.

​Capricorn represents big business, the establishment, and governments, while the lunar mansion, Uttarāṣāḍhā bridges Sagittarius and Capricorn and is where Saturn and Pluto's exact conjunction takes place in January 2020. Uttarāṣāḍhā is ruled by the universal gods that govern and control intellectual development. While this sign is usually a good time for defeating enemies and for auspicious undertakings, Saturn and Pluto's conjunction disturbs these indications and shows a challenge to doing the right thing. At least it shows us what needs to be done, even if we cannot find a way of doing it! By 2020, our hand is forced as Saturn moves into Capricorn, highlighting the inevitable next step.

Historical Saturn-Pluto Conjunctions
​The last three occasions Saturn and Pluto came together were times of great upheaval on the planet, as borders were tested and redrawn on each occasion. The last time this occurred was in 1982 when they met up in Libra and Citrā lunar mansion. Before that, was in 1947 when they joined in Cancer and Āśleṣā, and before that was in Gemini and Ārdrā in 1914 and 1915, as they met on two separate occasions in the 'dreadful' lunar mansion that is ruled by the god of storms and destruction, Rudra.

In 1982, the Saturn-Pluto conjunction saw a reset in the financial markets and a short but severe recession leading up to the exact conjunction in November. This conjunction also saw the beginning of the AIDS epidemic and fears for its impact on humanity. The conjunction occurred in sidereal Libra (Venus rules Libra and represents sex and money). 1982 also saw the Falklands War and Canada gain full political independence from the United Kingdom.

In 1947, the conjunction saw the reshaping of many parts of the world, a ‘New World Order’, with the formation of Israel and the breaking up of India and Pakistan. Tensions are mounting once again in these same regions in the lead up to the conjunction in 2020. 1947 also saw the first year of a cold war between the Soviet Union and the US, while the Rosewell incident broke other, extra-terrestrial boundaries!
​
In 1914, World War 1 began in the months prior to their conjunction; an indication that the run up to this powerful configuration is often more challenging than the subsequent separation. In 1914, and again in 1915, the conjunction occurred in Ārdrā, a lunar mansion ruled by a fierce and angry form of Shiva called Rudra, the god of storms which creates sorrow. The conjunction in this sign was highly volatile due to the lunar mansion involved and because they met here on two occasions spanning two years.

Historical Conjunctions in Sagittarius and Capricorn
The last time Saturn and Pluto joined in sidereal Sagittarius was in Jan 1518  (in a relevant orb from Nov 1517 to Feb 1518 and Jun to Oct 1518). The African slave trade began at this time. In 2019, we are more aware of human trafficking and, yes, slavery in our modern era. The other big signification of their previous conjunction in Sagittarius, the sign of religion, was the Protestant Reformation, when Martin Luther pined his ’95 Theses’ on Wittenberg Castle Church door in Oct 1517, ultimately causing a split in the Catholic church and the formation of the Protestant religion.
​
In Dec 1284, Saturn and Pluto conjoined in Capricorn (in a relevant orb from Feb 1284 to Jul 1284 and Nov 1284 to Jan 1285). This is when Venice introduced a gold coin that become the standard of European currency for the following 600 years. Capricorn is all about business, of course. King Edward, I of England took steps to separate church from state. Capricorn is not about religion, although a very spiritual sign. It has little time for the philosophical or religious ideologies of Sagittarius. This is where Jupiter is debilitated, after all, and is all about getting down to business. Also, in 1284, Sultan Qalawun began the siege of Margat which is modern day Syria.​