searching for Soma: The elixir of life

​‘We have drunk Soma and become immortal.
We have attained the light, the Gods discovered.
Now what may foeman’s malice do to harm us?
What, O Immortal, mortal man’s deception?
​
​   - Ṛgveda ​8. 48. 3. Translated by Ralph T.H. Griffith

​​In the mythological story The Churning of the Ocean of Milk the gods needed the demons (asuras) to help churn the oceans to obtain the elixir of life, of immortality, Amṛta or Soma. The gods and demons churning is analogous of our need to use some of the poison itself, the demons, to come up with a cure for what ails us, and the mind’s tendency to swing wildly between hope and despair in our search.

There's another part to this story. After the elixir was obtained, Viṣṇu, the lord of sustenance, was distributing the nectar amongst the gods. Viṣṇu, as Mohini, distributed the nectar to the gods, while the demon Svarbhānu, disguised as one of the gods sat in between the Sun and Moon, Sūrya and Chandra, to drink the immortal nectar.  The demon had already drank of the nectar when Viṣṇu was alerted to this deceit, thus becoming immortal. Viṣṇu threw his discus at the demon and cut off his head (depicted below). 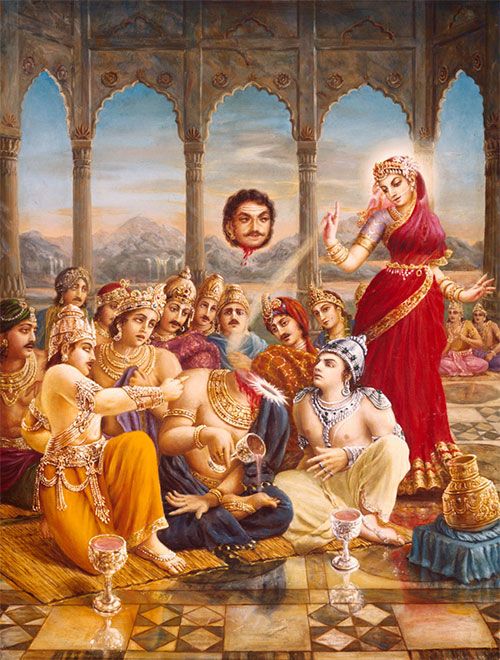 Rāhu​, the north node of the Moon, became the head of the demon, and Ketu, the south node, the headless body, forever more chasing the Sun and Moon, eclipsing them.

When I reflected on this story and its relevance, I came to see this as a representation of viruses, which are ruled by Rāhu and Ketu in Indian astrology. Viruses are to biology what the asuras or demons are to the gods. Cells are alive, of course. Viruses are not. But viruses can hijack cells to proliferate, reminding us of the deceit in the story, the ability of viruses to infiltrate and hide in cells.

Of course, we could also relay this to mental aberrations, the demons which fight within ourselves. The current transits of Rāhu and Ketu can be seen in the current pandemic, the loss of life (Ketu in Sagittarius), as well as the 'infodemic' (Rāhu in Gemini). What is produced from this churning, between the gods and demons within, is the joy of being alive, of being, the bliss of Soma, but only after we have struggled with our demons.

​Soma is a blissful state of being, but it is also any substance which allows us to experience bliss, boosting health and longevity through substances and practices which increase immunity and longevity – so we can prolong joyful and blissful experiences.

There are many ways to obtain Soma. Regarded by many as an actual substance, Soma is seen as either a medicinal or hallucinogenic plant, herb, or mushroom. Rāhu is said to rule hallucinogens, including ‘magic’ mushrooms, which is an interesting correlation. Although it is not known conclusively what substance Soma was, as it has long since been lost to the ages, many Sanskrit scholars believe it to be a mixture of several plants. Soma is synonymous with the Moon god, and the Moon rules nutrition, so one could argue that Soma is available in anything nutritious.​

Today, we know of somatotropin, or Human Growth Hormone (HGH), which promotes recovery, youthfulness and joy. There are practices such as intermittent fasting which are said to increase HGH, showing us that we need not have an actual substance to obtain Soma. But the lack of something can lead to blissful states, too. Lack of food, for example, or the retention of the breath have been practices utilized by people for religious and spiritual purposes, which can lead to bliss. There are also many yogic practices which preserve youthfulness and prevent the loss of Soma, which is what leads to ageing.​

Inversions such as Viparitakarani, or ‘reverse pose’, are restorative for this reason, as the Soma which is released above the palate, at the Soma chakra, is prevented from dripping down and burning up in at the solar plexus. But we can also offer our Soma into the fire, as practiced in many rituals around the world. In other words, we can offer our essence to be transformed into higher energies, an offering to God. ​

There's a whole section of the Ṛgveda dedicated to Soma, but whether Soma was or is an external substance, or just an internal state of being, the aim is the same, that of joy, of bliss. Taking a substance has its side effects, of course, while internal practices require years of discipline. Although blissful states can be achieved through various means, including breath control and meditation, a substance can be taken to gain temporary access to such states. This needs to be married with ritual and guidance for it to be safely assimilated.​​

​​‘’Navel above, palate below, sun above, moon below’’.
- The Hatha Yoga Pradipika. An English Translation by Brian Dana Akers

​The Race is On
Everyone wants to find the elixir of life, be it in a tincture form, a tablet, a food or practice, and will do anything to get our hands on it!

The churning of the oceans, the search for a cure, or treatment, will intensify in the coming months as Rāhu continues through this lunar mansion until the New Year, while the annular eclipse in Gemini during the Solstice in June of 2020 is placed in - yes, you guessed it, the god Soma’s domain, as ruler of the lunar mansion Mṛgaśīrṣā, a lunar mansion or star sign that is often referred to as the 'star of searching'.

The symbol for this lunar sign is a deer’s head (Mṛgaśīrṣā means ‘deer head’), the deer reflecting the sign's soft, gentle and curiousness qualities. This lunar mansion is split evenly between sidereal Taurus and Gemini (6 degrees and 40 minutes in each), reflected in both its sensual (Taurus) and excitable (Gemini) nature.

There’s an inquisitiveness about the deer, reflected in those with the sign prominent who are usually quite sensitive and fickle, roaming about, excitedly exploring new avenues of adventure. These are the traits we often think of when we think of the sign Gemini. Alongside this curiosity and playfulness comes a need to keep oneself safe and well, of course. You know what curiosity did to the cat!

​The innocence of a deer needs protection, reflected in the antlers on a deer’s head; the antlers also being symbolic of the mind's tendency to go off in all directions. If the mind is let wander, it can end up going down some dark avenues.

This is shown by the subsequent lunar mansion in Gemini called Ārdrā, where Rudra, a fierce and destructive manifestation of Śiva resides. Rudra, literally ‘the howler’, is ruler of this volatile and fear-inducing lunar mansion.

Interestingly, Rudra was born with an identity crisis, not having a name, and as Rāhu transited the sign during the initial viral outbreak we saw it change names several times.
Ārdrā literally means ‘moist’, and is symbolized by a teardrop, pointing to the signs ability to bring new life after a testing time, but a lot of tears in the process. It’s also interesting to note the spread of the virus through droplets; one of the symbols for the sign. Much like a storm, Rudra challenges mental equilibrium which is a stage we must go through to come out the other end. The subsequent sign is called Punarvasu, which means ‘light again’.

But while the planets usually move forward through the lunar mansions in the order just given, the lunar nodes, Rāhu and Ketu, always move backwards. Rāhu first entered Ārdrā in 2019 and will enter Mṛgaśīrṣā in May 2020.

The planets moving through these lunar mansions in direct motion usually expresses itself in the tendency to enjoy the excitements and the substances which excite at the Mṛgaśīrṣā stage in Taurus, sharing those with others at the Gemini stage, a sign that is all about the interaction, before having to pay the price at the Ārdrā stage, the hangover, if you will. The spirits we partake in may initially give us the high we crave, but they eventually bring the mind to some very dark places. The stage of Ārdrā could be likened to a bad trip, challenging us to stay level-headed.

Rāhu’s transit in 2020 is opposite this flow, as it moves through these lunar mansions in the opposite direction, from Ārdrā to Mṛgaśīrṣā; from the volatility already experienced to the need for something, some substance or something which can give us a sense of joy, reflected in the soft Mṛgaśīrṣā. However, Rāhu doesn’t get things in the most ethical of ways! It shows the darker side of trying to obtain the nectar of bliss, a cure or treatment, the deceit that is possible in making a quick buck, for example.

But it also points to some innovations, including the use of technology as a means to track the virus. This is an expression of Rāhu in Gemini, the sign of interaction and communication.

We are likely to see the race for a cure ratchet up a notch as soon as Rāhu enters Mṛgaśīrṣā by the end of May, but it also points to more need for enjoyment in the summer months. While overindulging is always possible with Rāhu, as its seen as a head with no body to satiate, these enjoyable things are the very thing we need to remedy the fears generated by the fierce and destructive sign Ārdrā, as well as Mūla, the lunar mansion which is currently housing the opposite lunar node, Ketu.

Ketu, the south node rules Mūla, making it impact us very strongly, bringing out the fear of loss and death. While Rāhu’s shift to Mṛgaśīrṣā offer some relief, Ketu in Mūla continues to make us feel ungrounded, as it transits the domain of Nirṛti, the goddess of death. Ketu continues to transit Mūla until Sep 2020.

The June 21 eclipse in Mṛgaśīrṣā offers new insights and the possibility of a treatment or vaccine being developed, balancing the previous Ketu eclipse, the tail with the head of the demon, with a Rāhu eclipse. Rāhu has a shady side, of course, so any treatment plan won’t be so straightforward or without controversy. Rāhu represents fake news, especially as it transits Gemini, but Rahu is fake... anything. Once it transits Mṛgaśīrṣā it will likely be expressed in many fake cures or treatments being touted, or confusion about certain treatments, or legitimate ones being sold on the black market or attained by some unlawful or unethical means.

Image courtesy of  www.sanatansociety.org
​
Soma Chakra
The Soma chakra is said to be above the third eye and below the crown. When the breath is halted naturally, without force, this chakra is said to open and allow Soma to flow, creating states of bliss. This chakra relates to the pineal gland, and the pineal gland produces melatonin, another substance we could relate to Soma. Melatonin regulates our circadian rhythms, of course, which improves sleep and recovery.
​
Listen to Dr. Vasant Lad speak about Soma in the video below.