​Spirituality in the Horoscope

By Gary O'Toole
Finding our way amongst the many spiritual routes available these days may seem like a daunting task. Everyone is touting the next best thing in how to achieve flow states and a spiritual awakening. And yet, how many achieve it as a long-lasting experience or way of being?​

Are we barking up the wrong tree?

If we can recognize our own natural inclinations, we would spend a lot less energy focusing on what others think we should be doing and use that energy on what we are here to do - to find our flow in activities which suit us. In doing so, we can rest in a natural state of being, at one with all that is.

Everyone has a different route, to the same place of being. We can all go our own way and meet there.

When someone says they did something that felt like a spiritual experience, what they are really saying is that they were in a state of natural flow, which led to a state of oneness within the activity they were performing.

It may be that we are not all barking up the wrong tree, but that we are using ill-fitting equipment to get up there!

Thankfully, there is one quick way to see the spiritual path we are inclined towards in the 'Vedic' birth chart. When we have this confirmed for us, we drop everything else that, although may be stepping stones at some point, really do not always feel natural. You may not call this spiritual, of course, but when you observe it, it brings you a sense of being at one with the universe.

This is seen in the 9th divisional chart. Each sign in the birth chart is divided into 9 parts or navamshas (literally, ‘9 divisions'). In this chart, whatever planets are placed in any of the trinal (1, 5, 9) houses show what we find natural. These represent natural talents and skills. Whether we use them or not, is another matter. Many of us do what other people think we should be doing, not what we know, deep down, we should be doing.
​
​
Flow States & the 9th Divisional Chart
The planets placed in the first house, in particular, in the 9th divisional chart, represents an innate, natural talent one is born with. This planet shows a natural tendency and dharma, or ‘purpose’, in a spiritual practice, too. The natural skill we have is also our purpose, our natural spiritual practice, and probably the most common question asked in astrological consultation, i.e. what is my purpose?

As far as I can see, our purpose is something that is natural, an innate talent or skill or inclination. Although it is argued about whether we are each born with a natural talent, this is clearly shown in the Vedic horoscope.

If you have a planet in the first sign in your 9th divisional chart, this is a natural talent you were born with. If you have planets in the 5th, it shows something which may require a little work on your part, but it is there, waiting to be developed, as the 5th house represents the future. If you have planets in the 9th house, you may need a teacher (9th represents a teacher or teachings), but it is still something which feels natural to your development when you learn it.

To follow are some general indications for each planets’ significations in these trinal houses. Each indication will be modified based on the particulars of your chart, the sign involved and its ruler, as well as your main birth chart which reflects how these are expressed outwardly. The 9th divisional chart represents something that is deep within, which is another indication of spirituality.
​
​
Sun
The Sun represents rhythm. It moves one degree a day, steadily. Having the Sun in trines shows a natural ability for music and dance. Music and dance are one way we can all go with the flow, of course, but with someone who has the Sun in one of the trines, either the 1st, 5th, or 9th houses in the 9th divisional chart, this is indicated more so. The Sun represents oneness, of being one with it all. The alchemical symbol for the Sun (pictured) shows a state of non-duality. This state can be achieved through anything which gives a sense of flow, while being at one with the activity, when the doer, what is being done, and the doing, all become one. Spiritual schools of thought that focus on non-dual states would likely suit such an individual.  ​
​ 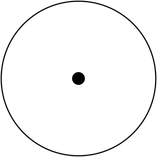 ​Moon
Having the Moon in trines shows a natural ability for melody. When someone has both the Sun and Moon in trines, this guarantees musical ability. Unlike the Sun, however, the Moon represents the duality of mind. The Sun is the one, reflected in the many, the Moon; the Atman and Jivatman. The Moon does not have a light source of its own, of course. It simply reflects the light of the Sun, which is an aspect of duality. The Moon can show a path of dual philosophy, perhaps a devotional spiritual practice, as well as a healing path, of healing the split from source, from a non-dual state.
​ 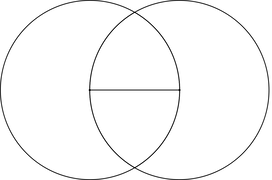 ​Mars
When Mars is in trines it shows a natural inclination to use one’s strength and courage. This is the extreme sports junkie who can reach states of flow when having to overcome their fear, or the individual who overcomes their fear and opens their heart to the divine. This can be expressed in practices which requires courage to perform, or a task that requires skills and nerve to accomplish. Martial arts is one obvious example, but anything where one is fighting for a cause would suit such an individual. Mars represents logic and anything that is done, no matter how successful, would have to have a certain logic to it to attract someone with Mars in trines to do it in the first place.

Mercury
When Mercury is in trines it shows a natural inclination towards physical practices. Practices such as hathayoga would be a natural path to follow for such a person, as would t’ai chi, or any practice which focuses the mind. Mercury’s Sanskrit name is Buddha which points to the need for discrimination, the ability to know one’s true nature. Any practice that uses the intellect to systematically come to such realizations would be ideal. ​

​Jupiter
When Jupiter is in trines it shows a natural inclination to be able to bring many different elements together, to expand one’s knowledge base while bringing these together into a cohesive whole. This would show non-dual spiritual practices and knowledge as a path to awakening. Jupiter represents the element of space which is the binding element, the one which holds all others together, so these individuals are apt to bring different elements together, different schools of thought, different points of view and spiritual practices, to be able to achieve a state of flow. ​

Venus
When Venus is in trines there is a natural inclination towards art and sensuality as a path to flow. The most obvious expression of this would be through practices such as dance, as well as sexual practices such as those found in tantra. Venus represents the water element, which itself likes to flow. An artist in the process of making art is in a state of flow while making it. Someone experiencing life through sensual enjoyment can use these experiences to achieve flow states. ​

Saturn
When Saturn is in trines there is a natural inclination to follow tradition. It also gives one the ability to work for work’s sake, without reward. This would show that karma yoga, the act of selfless service, is a natural path and one which can give one the state of flow. Saturn represents the element of air, which is shows some detachment and can show a natural ability to detach and work alone, for example, either on a task or in spiritual retreat. ​

Rahu (North Node of the Moon)
When Rahu is in trines there is a natural inclination to choose unusual paths to flow experiences, to go outside of one’s culture and religious upbringing and incorporate these into one’s practices. Rahu shows the ability to work with the ‘dark arts’, perhaps worship of the fierce gods and goddesses. Rahu is the north eclipse point, so essentially a shadow, so working with the shadow could find your way to spiritual life more easily, perhaps doing things which others may find inappropriate.

Ketu (South Node of the Moon)
When Ketu is in trines there is a natural inclination to, like Rahu, unusual practices. It shows other worldly realms of spirits, as well as psychic practices and more intuitive thought. Ketu is the headless body of the mythic serpent, so the most obvious expression of Ketu as a spiritual path is the ‘Headless Way’, a modern school of thought founded by philosopher Douglas Harding which promotes experiments in seeing ‘who we really are’. Ketu is the ability to see without having to look, of knowing without having to learn. ​