The Astrology of a Virus
​

By Gary O'Toole
What I had seen for 2020 was an attack. I just never thought it would be a virus!
​
On December 26, 2019 we experienced an annular solar eclipse at 9 degrees of sidereal Sagittarius. All the planets except for Venus and Mars were placed in the sign, with Venus on one side in Capricorn and Mars on the other side in Scorpio.
Here is the chart for the eclipse in Wuhan, with the sign Scorpio rising. This was the trigger for the viral outbreak.
​ 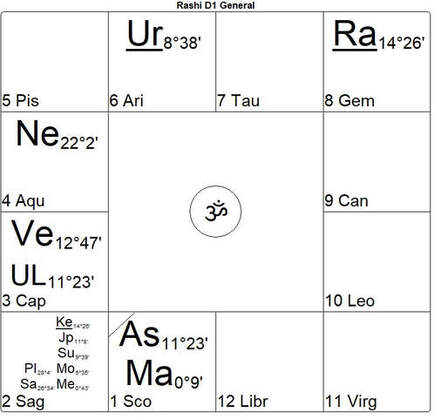 ​Why is this relevant in relation to the coronavirus, named Covid-19? Firstly, Ketu the south node of the Moon, which showed the timing of the eclipse, is said to rule viruses in Indian astrology. Ketu co-rules Scorpio along with Mars. This eclipse and the subsequent transits of planets over the eclipse degree, showed the timing and spread, but because Jupiter, the planet of expansion, was right there from the start, the spread took off right away.

Mars has just moved over this degree as I write this in late February 2020, while Ketu itself will move over the eclipse degree by the first week of March.

When I initially saw this eclipse line up and subsequent transits, I thought there would be a cyber attack and predicted this in my yearly forecasts and predictions, which you can watch here. I thought these attacks would have a knock-on effect on travel and trade. While I was right about the latter, I didn’t foresee a virus – at least, not a human one. Ketu also rules computers which is why I made the prediction.

In hindsight, it seems more obvious to indicate a virus spread through the human population. The eclipse at 9 degrees of Sagittarius in the lunar mansion Mūla, the sign of death, is itself associated with Ketu. Jupiter’s conjunction, within 1 degree of the eclipse, showed the spread. The source? Jupiter rules the second sign from Scorpio, the sign rising in China at the time of the first reports. The second sign represents food.

Mars’ subsequent conjunction with the eclipse degree shows the attempt at a crackdown by authorities, to contain the spread.
The Chinese chart, based on the People’s Republic of China of 1949 has Capricorn rising and Moon sign, which reflects the need for containment and isolation from other countries, when we see Saturn’s current transit here from January 2020. The Moon rules the 7th house of other countries, and Saturn’s transit to the Moon is alone enough to create restrictions. Add this to the ascendant, and it’s guaranteed.

Here is China’s Vedic Chart, based on the People’s Republic of China in 1949.
​

​Saturn moved into Capricorn on January 25, 2020 and will remain here for most of the next 3 years, until January 2023. These years are significant for how China deals with the restriction. More immediately, Saturn will station very close to the ascendant and Moon, within 1 degree of the ascendant and 2 degrees of the Moon, by May 2020. This will be a testing time for containment and as it retrogrades back to 1 degree by September this will be a time to draw new boundaries and put in place reforms.
​
During this whole period in 2020, Jupiter will conjunct Pluto. They are exactly conjunct on 3 separate occasions: first on April 4, then on June 30 and finally, on November 12.

Jupiter and Pluto conjunct at the very end of Sagittarius and beginning of Capricorn, where we find the lunar mansion, Uttarāṣāḍhā. Meaning ‘latter victory’, this lunar sign suggests the quarantine and containment will ultimately succeed, but not until a lot of austerity and a possible economic downturn.

One of the symbols for Uttarāṣāḍhā is the planks of a bed, showing the hardships one must put up with to see a goal to completion, to be victorious. Capricorn knowns what must be done and does it and is the most responsible sign of the zodiac – just not the easiest.

When Pluto and Jupiter get together, we experience more understanding (Jupiter) about illnesses and death (Pluto). But it also has the potential to increase the death count. Their conjunction may also point to a cure, as Jupiter brings the knowledge necessary to deal with the Plutonian underworld. When we cannot see something, it has more of a chance of spreading. Thankfully, past Jupiter-Pluto conjunctions has led to many deep insights into our inner workings, including the microscope which was invented during a previous conjunction.

Hopefully, their conjunction in 2020 will help give a scientist with a microscope in some lab, somewhere, the ability to work out a cure or a vaccine. Any hope will be tested in 2020, of course, especially as Jupiter enters the sign Capricorn from March 30 until June 30, and again from November 20 until April 23, 2021. Jupiter will return to Capricorn once again, between September 14 and November 20, 2021.

With Jupiter entering and re-entering its sign of debilitation on 3 occasions in 2020 and 2021, we are likely to see some ups and downs in relation to our faith. The viruses’ impact on the economy will likely be reflected as an economic roller coaster as Jupiter transits alongside Pluto before meeting with stern Saturn on December 21, 2020.
​
This will be a time that all hope may seem lost, unless we are willing to look elsewhere. Here’s an article I wrote about Jupiter in Capricorn that may help you find hope somewhere.

China’s Cycles & Transits
The current planetary cycle in the Chinese chart is Mercury/Mercury/Ketu, when breaking it down to 3 levels of impact. The 3rd level shows how the country is reacting to events and circumstances. While Mercury is strong in exaltation, it is also retrograde, in Virgo which relates to disease (6th house) and foreign travel (9th house) in this chart, while its conjunction with Ketu blocks some of its strength and the indications health and travel. Ketu acts like a headless person. It blocks rational thinking, and shows an impulsive reaction and many mistakes. While Ketu may show more immediate mistakes, they will learn from these, while Mercury is active in the chart until 2036.

The signs triggered by a particular sign progression technique used in Indian astrology are Gemini/Cancer currently. Gemini is again highlighting illness as the 6th house, while Cancer brings complications in dealing with other countries when the Mars and Pluto conjunction is taken into account in the chart's 7th house. The lunar sign housing Mars and Pluto is Ashlesha which represents poisons and their use in healing. The sign Cancer is highlighted until June 2020, while Gemini is highlighted until October 2021.

Pluto has just transited the China chart’s natal Jupiter, moving into Capricorn as I write this on February 25. Pluto’s transit to Capricorn shows, just as it did the last time it transited sidereal Capricorn between 1773 and 1797, a need to reform systems.

The upcoming Pluto transit in Capricorn occurs from 2020 to 2040. China is due a major overhaul in these years. As I write this, 20,000 exotic animal farms, hitherto unknown to the wider world, have been reported to have been shut down to curb the spread. Pluto exposes things.

Saturn’s transit in Capricorn for the next year especially will challenge China to make these reforms, while Pluto and Saturn combined bring a fear of restrictions. Yet Pluto has the job of removing what no longer works.

Saturn builds, slowly. Pluto changes, much more slowly. While this change can be seen in governments and systems around the world, China is one of the countries charged with making more changes than most, it seems.

Pluto is seen as ruler of Scorpio in modern astrology. It is said to bring up things previously hidden, things like viruses, like Ketu. Scorpio is where we see the possibility of a spread of viruses, the sign that was rising in China during the eclipse of December 2019, the eclipse that showed the trigger for these events.

Fear is a natural response. Scorpio represents fear. Control is another natural response. Scorpio represents control - or at least a wish to control. Mars is the traditional ruler of Scorpio and represents the need to enforce something and to find courage within.
​
The response by China and other countries, including America and many European countries, is to crackdown on those suspected of being sick, as if they were terrorists harbouring a deadly weapon.
​
In a way, anyone with the virus is indeed handling a deadly weapon; one that has the potential to kill. The main theme which comes from these transits and the lunar sign Uttarāṣāḍhā is that with enough austerity the world can respond to this emergency and do the necessary to contain it. The current transits bring more awareness to this but they also block it to some degree.

Let us hope these transits do not block being able to do the responsible thing and, in the end, victory over the virus.